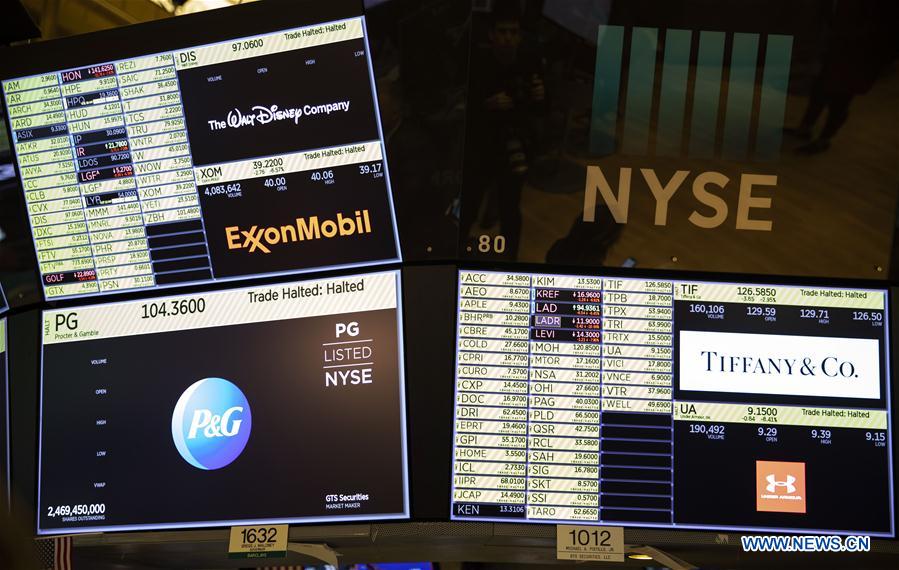 Screens show that the stock trade is halted at the New York Stock Exchange (NYSE) in New York, the United States, on March 12, 2020. (Photo: Xinhua)

Intensifying coronavirus fears battered Wall Street on Thursday with a historic nosedive in its worst session since the 1987 market crash.

The Dow slumped more than 2,300 points, or about 10 percent, at the close, notching its biggest one-day percentage drop since the 1987 Black Monday market crash, when it collapsed by more than 22 percent.

The Cboe Volatility Index, widely considered as the best fear gauge in the stock market, spiked 40.02 percent to 75.47 on Thursday, hitting its highest level since the 2008 financial crisis.

Trading was halted for 15 minutes shortly after Thursday's opening bell, in the wake of the benchmark S&P 500 stock index tumbling more than 7 percent. It was Wall Street's second 15-minute halt in four days. The so-called circuit breakers, or trading halts, were first introduced after the Black Monday crash of October 1987, and until this week had not been tripped since 1997.

The Federal Reserve unveiled dramatic measures to ease market strain from the virus.

The Federal Reserve Bank of New York said in a statement on Thursday afternoon that it offered 500 billion U.S. dollars in a three-month repo operation, adding that it would repeat the exercise on Friday, along with another 500 billion dollars in a one-month operation, and continue on a weekly basis for the rest of the monthly calendar.

"These changes are being made to address highly unusual disruptions in Treasury financing markets associated with the coronavirus outbreak," the New York Fed said in the statement.

The markets got a brief respite after the announcement but quickly traded back toward their session lows as investors awaited more aggressive measures to bolster the economy amid the epidemic.

U.S. President Donald Trump said on Wednesday night the country would suspend all travel from European countries except Britain for 30 days in a bid to fight the ongoing coronavirus outbreak.

Addressing the nation from the Oval Office at the White House on Wednesday, the president said he would also direct the Treasury Department to "defer tax payments, without interest or penalties, for certain individuals and businesses negatively impacted," beyond the April 15 filing deadline, in an attempt to provide more liquidity to the economy.

But Trump's remarks failed to calm markets over a possible economic slowdown, according to experts.

"Markets reacted negatively to what was perceived as a solemn but confused speech that placed blame on other nations, omitted to focus on immediate actions to relieve the most affected individuals, and lacked in concrete fiscal and health measures to address the economic and financial impact of the virus," Gregory Daco, chief U.S. economist at Oxford Economics, said in a research note Thursday.

Vicious market swing has become a norm for U.S. equities these days amid the coronavirus crisis.

The World Health Organization said on Wednesday that the COVID-19 outbreak can be characterized as a "pandemic" as the virus spreads increasingly worldwide.

As of Wednesday night, there were over 1,300 confirmed cases and 38 deaths in the United States, according to a tracking tool developed by the Center for Systems Science and Engineering at Johns Hopkins University.

"Currently, the virus remains uncontained in Europe and the United States, and, although we have seen some stimulus measures from policymakers, it is unclear if it will prove comprehensive enough to mitigate the economic damage arising from coronavirus containment measures," said analysts at UBS.