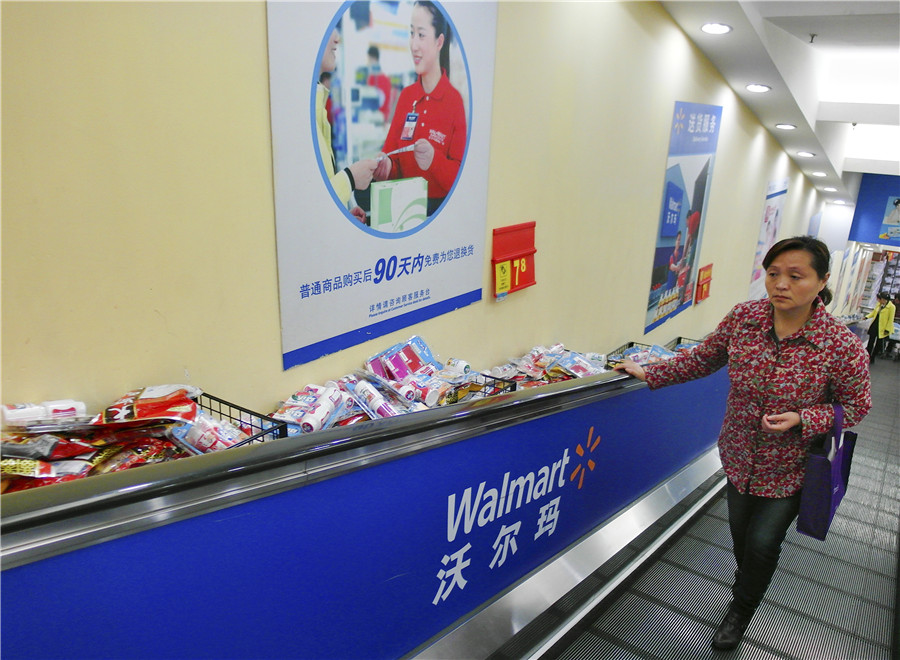 A consumer stands on an escalator in a Walmart store in Yichang, Hubei province. (Photo: China Daily)

US retail giant Walmart Inc will continue to grow its hypermarkets, Sam's Club stores, and community-based smaller-sized supermarkets businesses in China with more advanced technologies, according to a top official.

Doug McMillon, president and CEO of Walmart, told China Daily during his visit to Shanghai on Thursday that China is still one of the most important markets for the US retailer. Technology will be another major focus area for the company in China as Walmart has always been a "people-led company that relies heavily on technology," he said.

McMillon said Walmart has developed digital solutions to better understand customer behavior and spending patterns, which in turn has helped the retailer to create new products and to solve old retail problems with modern technology.

Wern-Yuen Tan, president and CEO of Walmart China, said digital technology has helped Walmart to reach out to more customers and improved the overall decisionmaking process.

For example, technologies like artificial intelligence have improved the company's stocking and inventory processes.

"Earlier we were reliant on the intuitions and experience of the local operation team. With the use of technology like AI and big data, we are getting more accurate answers."

As a larger and older retailer, Walmart has constantly worked with startups, said McMillon, citing the new Omega 8 platform that enables retail innovation startups to collaborate with Walmart China to create better services for customers.

McMillon cited the example of a scanning ring developed by a starup for Walmart that shortens pickup time for JD Daojia orders to less than 10 minutes and improvements in the overall efficiency by 50 percent. Walmart's WeChat mini-program has over 30 million members and is developing an e-commerce service based on WeChat to help customers shop more easily and more accurately.

Thanks to the integration of its online-and-offline businesses, McMillon said brick-and-mortar stores have become hybrid, and forward fulfillment centers.

He said Sam's Club has been gaining strength in the country. The high-end membership store that was launched in China in 1996 has about 2 million members nationwide. By 2020, there will be 40 such clubs either in operation or in construction in the country. The format has 23 stores currently in 19 cities stocking quality fresh food and membership products.

Globally Walmart has 11,300 stores, with a third of them large stores.

According to Kantar Worldpanel, in 2018 Walmart's market share was 5.4 percent, an improvement from the 5.2 percent in 2017. Last year it opened 33 new stores, including 21 hypermarkets, four Sam's Club and eight compact stores.