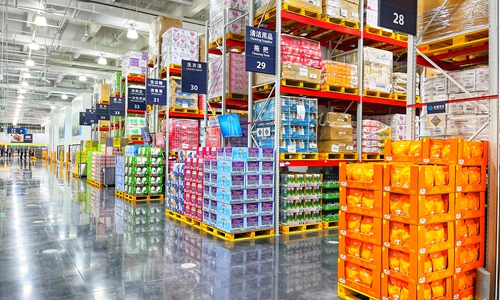 US-based supermarket chain Walmart said on Monday that an internal review found no basis for competitors' claims that Sam's Club, a membership-based business unit of Walmart, was "forcing suppliers to take sides." The response followed disputes with other retailers, including France-based grocery conglomerate Carrefour and the domestic brand Hema.

According to media reports, the first membership store of Carrefour in China encountered an "embarrassing" situation in Shanghai on its opening day on October 22, as some of its suppliers repurchased large quantities of their own products - supposedly, an attempt to "cut off" the supplies of the store in response to alleged pressure from competitors.

Some suppliers claimed that they had been told to take sides between Carrefour and a competitor. Carrefour reported the case to market authorities, alleging that Sam's Club was involved, said media reports.

Hema, a domestic retail brand under Alibaba Group, is planning to file a complaint with market regulators about "suspected unfair competition" by Sam's Club because it had the same experience as Carrefour after its membership store opened, according to China Business News.

After learning of the rumor, Walmart launched an internal review, but it didn't find any evidence for the issues raised by the other companies, Walmart told the Global Times on Monday.

"The operation of Sam's Club in China has always adhered to the principle of legality and compliance...we hope that relevant parties can proceed from the facts, and stop behavior that disrupts market order," Walmart said.

"We reserve all legal rights to defend our reputation and legitimate rights and interests," the company noted.

Before any official findings are released, Sam's Club cannot be accused of unfair competition, experts said. But the controversy indicates that competition in the member store market has become increasingly fierce.