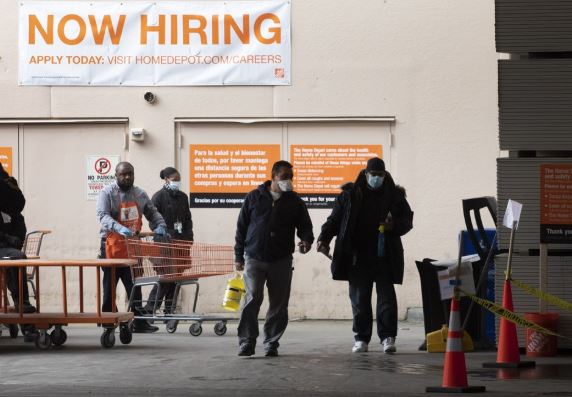 Home Depot customers carry their purchases as they leave the store, Friday, April 3, 2020 during the coronavirus pandemic in New York. (Photo: AP)

Walmart still wants customers, just fewer of them at a time. The nation’s largest retailer said it will now allow no more than five customers for each 1,000 square feet at a given time, roughly about 20% of the average store’s capacity.

To oversee the restriction, workers will mark a queue at a single-entry door, and direct arriving customers there, where they’ll be admitted one by one.

Walmart joins Target and others in trying to limit the number of customers in the store to curb the spread of the coronavirus.

Meantime, Delta Air Lines, American Airlines, United Airlines, Southwest and JetBlue said they applied Friday for their share of $25 billion in federal grants designed to cover airline payrolls for the next six months. None disclosed the amount they are seeking.

The grant money was part of $2.2 trillion relief bill approved last week. Delta’s CEO says his airline is burning more than $60 million cash per day, and United’s president puts it at $100 million a day. Airline revenue has cratered during the coronavirus outbreak. Delta carried 38,000 passengers last Saturday. On a normal Saturday in late March it flies 600,000.

And the global airline industry passed a milestone Friday: Half of all passenger jets are now grounded as airlines cut flights sharply. Aviation-data firm Cirium said that with another 530 parked since Thursday, there are now 12,635 jets in service and 13,655 grounded. The number of commercial flights is down 75%, according to tracking service.