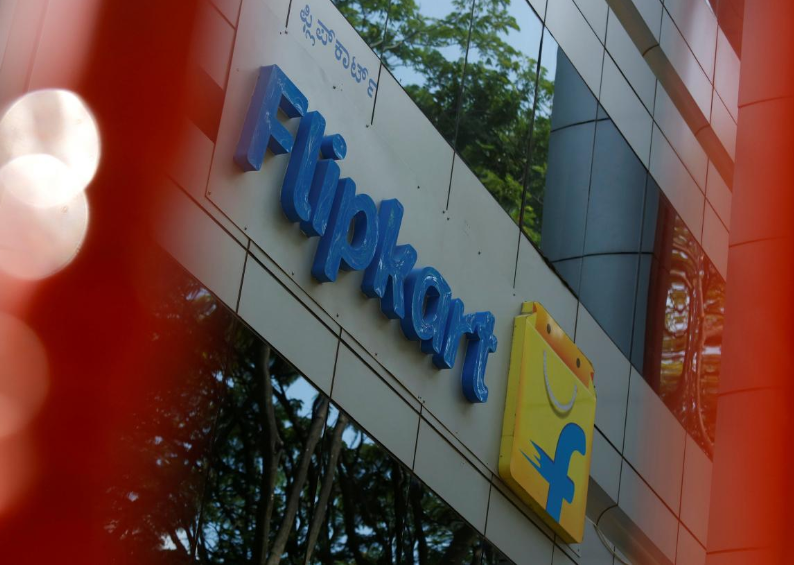 The logo of India's e-commerce firm Flipkart is seen on the company's office in Bengaluru, India April 12, 2018 (Photo: Reuters)

Walmart Inc (WMT.N) said on Wednesday it will pay $16 billion for a roughly 77 percent stake in Indian e-commerce firm Flipkart, and shares of the US retailer tumbled 4 percent on news of its largest-ever deal, an effort to compete with rival Amazon.com Inc (AMZN.O) in an important growth market.

Shares of Walmart fell 4 percent in afternoon trade after opening at a seven-month low as the company warned it expects the deal to shave fiscal 2019 earnings by 25-30 cents per share if it closes before the end of the second quarter. It also expects Indian investments to shave 60 cents per share from earnings in fiscal 2020.

For Walmart, the acquisition opens a new front in its battle with Amazon, which had expressed interest in making a competing offer for a stake. Amazon now holds about 27 percent of India's burgeoning e-commerce market, according to Euromonitor, where Walmart only operates 21 cash-and-carry wholesale stores in the country that sell to businesses. (GRAPHIC-Walmart's top 5 acquisitions: reut.rs/2rvc15j)

“We will not know for five to 10 years whether this transaction is successful strategically or financially,” said Steven Roorda, portfolio manager with Minnesota-based Stonebridge Capital Advisors. “Walmart has a very poor track record operating outside North America,” he said.

Jason Benowitz, senior portfolio manager at the Roosevelt Investment Group, said the deal probably will not do much to change market share between Flipkart and Amazon in India.

Sources had told Reuters they thought Amazon’s approach to Flipkart was likely a ploy to complicate Walmart’s bid.

"It would have been out of character for Amazon to write a check of that size to consolidate its market share in India, where it is already growing at a fast clip," Roosevelt's Benowitz said.(GRAPHIC-Top five M&A deals targeting Indian companies: reut.rs/2rwfZKI)

Flipkart sells consumer goods ranging from soaps to smartphones and clothes, and gives Walmart access to an e-commerce market that could be worth $200 billion a year within a decade, according to Morgan Stanley.

Walmart expects the deal will play a part in “setting the company up for growth and profits in the future,” Chief Executive Officer Doug McMillon said on a call with investors. McMillon has led Walmart’s efforts to boost international business.

Walmart has renewed its focus on catching up with rivals in key international markets.

The company retreated from Britain, selling a controlling stake in its British arm ASDA to J Sainsbury Plc (SBRY.L). Walmart is also trying to offload a majority stake in its Brazilian operations to private equity firm Advent International.

S&P Global downgraded its credit rating for Walmart to “negative” from “stable”, citing risk from the large investments the retailer is making to fix its global operations and its ongoing technology investments in the United States.

Walmart said it plans to fund the India deal through a combination of newly-issued debt and cash on hand. The investment will include $2 billion of new equity funding and Walmart said it remains in talks with other potential investors to join the funding round.

A new investor could lower Walmart’s stake, but the company plans to retain majority control of Flipkart. Reuters previously reported Google-parent Alphabet (GOOGL.O) may buy a roughly 15-percent stake in Flipkart for $3 billion.

The Walmart statement made no reference to the exit of Flipkart co-founder Sachin Bansal or SoftBank Group (9984.T), which was one of the largest investors in Flipkart through its Vision Fund.

Reuters had previously reported that Bansal and SoftBank would sell their entire stakes in Flipkart.

Other investors like Naspers and eBay said they sold their holdings in Flipkart.

“The deal reaffirms that there is big opportunity in Indian retail,” said Arvind Singhal, Managing Director of retail consultancy Technopak, adding it would attract more global investment into the sector.