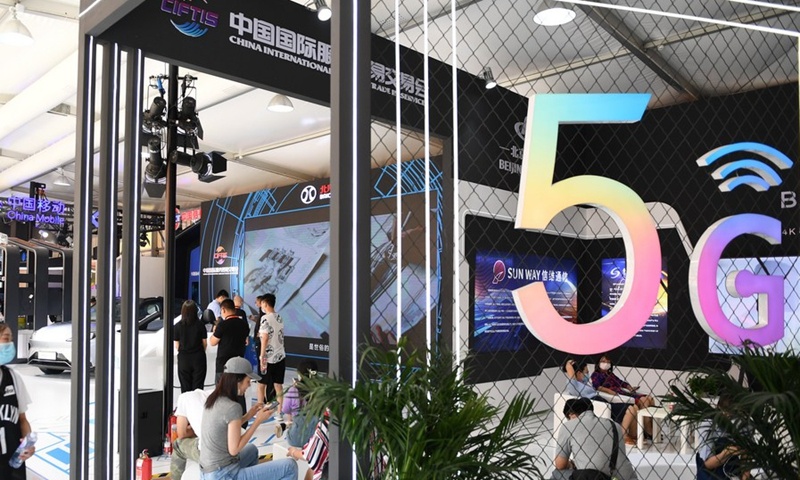 Photo taken on Sept. 5, 2020 shows a view of the 5G communication services exhibition area of the 2020 China International Fair for Trade in Services (CIFTIS) in Beijing, capital of China. (Photo: Xinhua)

Chinese netizens and experts expressed caution after India's minister of electronics and information technology said last week there are no proposals to ban all China-linked mobile apps or exclude Chinese companies from 5G contracts for wireless equipment. He made the comments during a question-and-answer session in the Indian parliament.

Minister of State for Electronics and Information Technology Sanjay Dhotre addressed concerns raised by members of the Indian parliament over bans on Chinese apps and 5G gear. The minister said the government had no plan to exclude Chinese companies Huawei Technologies and ZTE from 5G network infrastructure contracts, and he also revealed that there was no proposal within his ministry to ban all apps that are linked to China.

It is reported that the minister's comment on 5G procurement quelled fears among some telecom companies in India that Chinese players might be banned from participating in 5G trials and roll-outs as part of the Indian government's ban on Chinese products and services.

Although some observers excitedly said this might be a change in the Indian government's attitude toward Chinese investment, Chinese netizens were more cautious.

"Lift the ban on Chinese apps first and we will talk about the rest," one netizen wrote.

"This could be India playing its old trick of balancing again, and the message could be sent to pressure Western telecom operators," wrote another.

Dai Yonghong, director of Global Governance and Area Studies at Shenzhen University, said that the Indian government's reckless economic decoupling from China - in direct violation of the spirit of contracts - has bankrupted its credibility.

"The lesson surely cannot be forgotten by Chinese companies in such a short time, and any attempt to resume cooperation should be taken with extreme caution," Dai told the Global Times on Tuesday, noting that the minister's comments don't carry much weight in India's political climate, as they could be overruled by the Indian prime minister or other officials.

The Indian government has engaged in a reckless move to decouple with China following a deadly border clash in June. It has so far banned nearly 300 mobile services apps made by Chinese companies, made it hard for importers to bring in Chinese goods, and rolled out policies curbing Chinese investment in the country.

Those actions, in direct violation of the spirit of contracts, have caused the country's business climate to deteriorate significantly. Leading Chinese tech firm Alibaba decided to shut down operations for the UC Browser and lay off local employees.

Per a Global Times survey on Chinese experts in June, Chinese investment into India is expected to fall by 50 percent in 2020.

Chinese analysts said that while India is inclined to develop a new supply chain over which it can have more control, it is impossible to completely exclude Chinese products and services at this moment.

India has been ramping up its 5G strength. The country's Reliance Jio announced that it had developed its own 5G technology in July.

Jio was listed as a so-called clean telecom company by the US Department of State in a US drive to exclude Chinese firms from global telecom businesses.