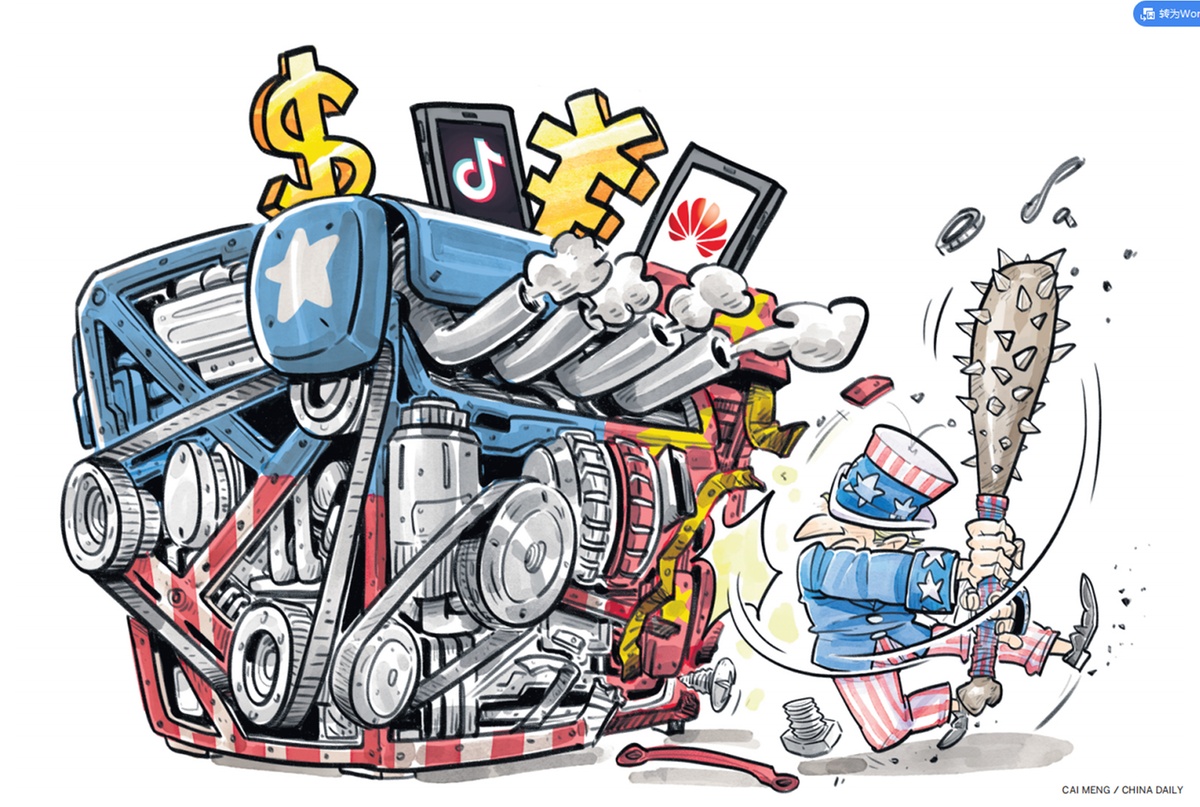 The presidential executive orders banning TikTok and WeChat mobile apps from the US markets and prohibiting Americans from dealing with them do a lot of financial damage to ByteDance, the owner of Tik-Tok, and some damage to Tencent, the owner of WeChat, but the big loser over the long term will be the US economy.

For many decades, the US has preached about the rule of law as an essential basis for productive markets. In particular, the US government always strongly objects when a government expropriates private property without just compensation at a market-determined price. Yet, the announcement that TikTok will be banned from the US with a 90-day warning period is very much an expropriation of private property.

TikTok is not separately traded on the stock markets, so there is no exact public measure of its worth. But, private equity and banking experts, who have great experience determining the value of companies, estimate that TikTok's business in the US was worth $20 billion to $50 billion before the executive order. Trying to sell this business within the 90-day deadline is estimated to lead to a price of $10 billion or less.

Even assuming, contrary to public evidence, there were some national security reasons for banning TikTok from US markets, there certainly is not a legitimate reason to force a very hasty "going out of business" sale.

The very short warning prevents the company from fully negotiating among all potential purchasers. And buyers know that the company's US business is under a death sentence, so they will offer far less than the fair market value of the company. The time is too short to explore deals with private equity buyers and is far too short for ByteDance to IPO its US assets as a separate company.

TikTok has been organically building its business in the US for years and has attracted an estimated 70 million US users. There is not even an allegation that the company has acted illegally. Why the hurry? The only explanation I can see is that the executive order was deliberately structured to reduce the sale price. It amounts to an outright expropriation of ByteDance's private property and of its fully legal investments in the US.

Making it even clearer that the ban on TikTok is an expropriation of property, the US government insisted that Microsoft will have to pay it a share of the profits from any deal for TikTok, in a call with Microsoft CEO Satya Nadella.

This executive order is a violation of the US three-part governmental system which consists of the president (the executive), the Congress, and the judiciary. In the US constitution, no major changes should be possible without the consent of all three branches. However, it is unlikely that the Congress will do anything to stop the TikTok ban because Chuck Schumer, the leader of the Democrats in the US Senate, has also attacked the app.

Traditionally, executive orders were used for minor matters such as changing a national forest to a national park, but in the last 10 years, two US presidents have tried to use executive orders to make very large changes without the consent of the other branches of government.

Members of the Republican Party rightly objected when president Obama went around the Congress by using executive orders to make big changes in the healthcare and immigration systems. They should be aghast that an executive order now threatens the very basis of US business law. It's a big shock to Americans to learn that a president, any president, has the authority to take a step like this without any action of the Congress and without any real possibility of judicial review.

Who's going to invest in the US now? In any business analysis, the perceived risk just went up a lot. Even investors from countries allied to the US must now factor into their decisions a risk that a president might decide to expropriate their assets.

Actually, even American investors have now been warned that a future president might be able to seize their assets for some claimed but specious reason. In 1952, president Harry Truman tried to seize and nationalize the assets of American steel producers. He also made dubious claims that this action was necessary for national security reasons. Fortunately, the courts and congressional opposition were able to stop this action, which would have seriously damaged the US business climate and rule of commercial law. But, after the TikTok expropriation, are investors confident that a future president could be controlled?

The decision to ban all US dealings with WeChat is even more ridiculous than the TikTok ban, if that's possible, in terms of the impact on the US economy. Instead of destroying the value of a Chinese investment in the US, this action will simply destroy the value of American companies' investments in China.

The big loser will be Apple, not WeChat's owner, Shenzhen-based Tencent. The billions of dollars investments made by Apple in China, will lose their value overnight. Apple has made these investments because it is confident in the reliability of China's rule of law, so it is confident that its assets won't be expropriated. The company's executives must never have imagined that the US government would end up destroying their property value in China.

WeChat is a rightly popular, even essential, app for those living in China. It is needed for everyday messaging and for making everyday payments. Nobody is going to buy a phone in China that cannot use WeChat.

The ban on WeChat will set a precedent that will give non-US companies and investors a big advantage over the US companies that risk arbitrary decrees of dubious legality from their own government.

Banning TikTok and WeChat also adds to the monopolistic power of the US tech giants. Facebook and Google will be very happy to see the suppression of possible rivals that could add value to American consumers by reducing monopoly profits of the tech giants.

Even ignoring questions of their wisdom and justice, the executive orders expropriating ByteDance's property and prohibiting Americans from dealing with WeChat will deal serious damage to the US economy and raise very real questions about the reliability of rule of commercial law in the US.