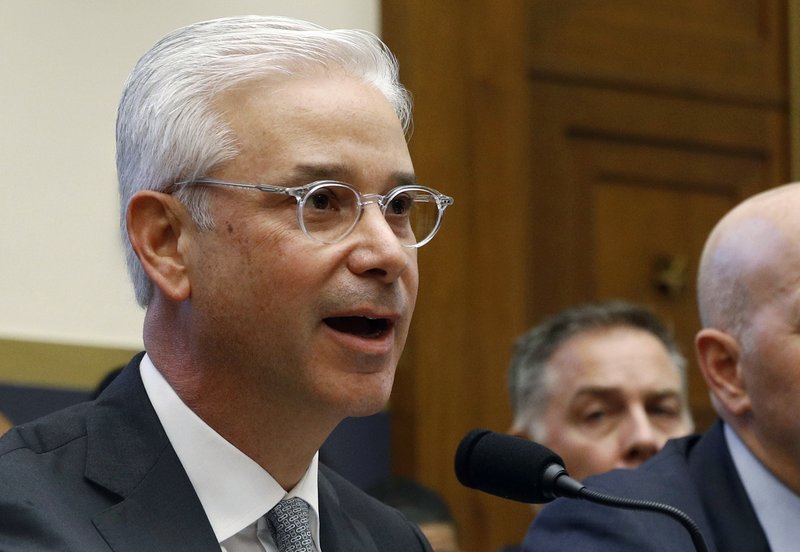 In this April 10, 2019 file photo, Bank of New York Mellon chairman and CEO Charles Scharf, left, testifies before the House Financial Services Committee during a hearing on Capitol Hill in Washington. (Photo: AP)

Wells Fargo named its third CEO in as many years as the bank attempts to put behind it a series of recent scandals.

Wells Fargo said Friday that Charles Scharf will take over for C. Allen Parker, who has led the San Francisco bank since March after its second CEO stepped down in quick succession.

Parker will remain in place until Scharf joins the bank on Oct. 21.

The company has been involved in a series of scandals starting in 2016 with the uncovering of millions of fake checking accounts its employees opened to meet sales quotas.

That led to the resignation of CEO John Stumpf in October 2016. Last year, the Federal Reserve capped the size of Wells Fargo’s assets, and Stumpf’s replacement, Tim Sloan stepped down after what many considered a poor performance defending the bank in front of Congress in March.

In June Wells Fargo & Co. announced that it agreed to pay at least $385 million to settle a California lawsuit alleging it signed up thousands of auto loan customers for costly car insurance without their consent, resulting in many having their vehicles repossessed. The 2017 class-action lawsuit alleged that for more than a decade, Wells Fargo tacked on insurance to customers’ car loans that they didn’t need because they had private insurance. The bank acknowledged in 2017 that $80 million in unnecessary insurance charges had been added to 800,000 auto loans.

Federal regulators who lost patience with Wells Fargo’s continued bad behavior inflicted harsh punishments. Wells had to pay a $1 billion fine last year to the Consumer Financial Protection Bureau and the Office of the Comptroller of the Currency. But more importantly, the Federal Reserve stepped in and handcuffed Wells’ ability to grow its business until the bank could prove that it had gotten its house in order.

Scharf is a Microsoft Corp. board member and previously served as CEO of Visa Inc.

“Charlie is a proven leader and an experienced CEO who has excelled at strategic leadership and execution and is well-positioned to lead Wells Fargo’s continued transformation, said Wells Fargo Board Chair Betsy Duke in a prepared statement.

Wall Street, yearning for stability at a bank with annual revenue close to $65 billion, sent shares of Wells Fargo up almost 3% before the opening bell.