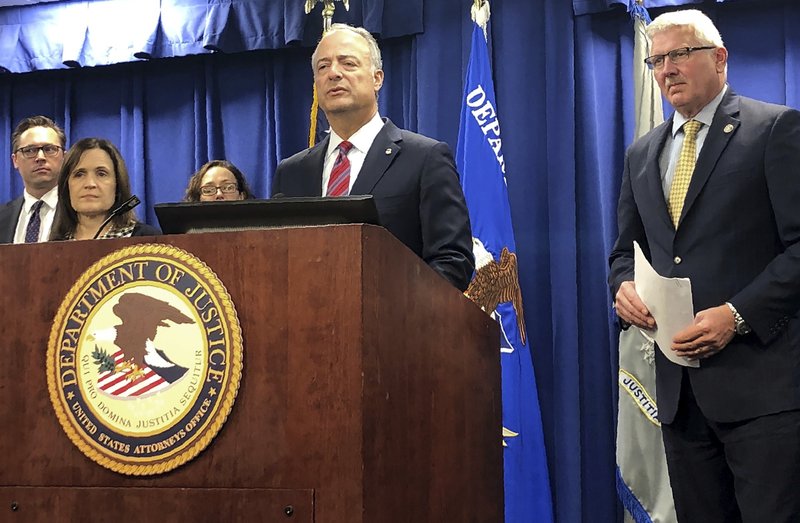 Nicola T. Hanna, US Attorney for the Central District of California, at podium, announces at a news conference in Los Angeles Friday, Feb. 21, 2020, that Wells Fargo has agreed to pay $3 billion to settle criminal and civil investigations into a long-running practice whereby company employees opened millions of unauthorized bank accounts in order to meet unrealistic sales goals. (Photo: AP)

WASHINGTON, Feb. 21 (Xinhua) -- Wells Fargo, one of the leading US banks, has agreed to pay 3 billion US dollars to settle criminal and civil investigations with the US Department of Justice (DOJ) and the Securities and Exchange Commission (SEC) over its fake accounts scandal, the DOJ announced Friday.

The settlement stemmed from a practice between 2002 and 2016 of "pressuring" employees to meet "unrealistic" sales goals that led thousands of employees to provide millions of accounts or products to customers under "false pretenses or without consent," often by creating false records or misusing customers' identities, according to a statement from the US Attorney's Office.

Wells Fargo admitted that it had collected millions of dollars in fees and interest to which the company was not entitled, harmed the credit ratings of certain customers, and unlawfully misused customers' sensitive personal information, including customers' means of identification.

The 3-billion-dollar payment includes a 500-million-dollar civil penalty to be distributed by the SEC to investors.

"This settlement holds Wells Fargo accountable for tolerating fraudulent conduct that is remarkable both for its duration and scope, and for its blatant disregard of customer's private information," Deputy Assistant Attorney General Michael D. Granston of the DOJ's Civil Division said in the statement.

US Attorney Andrew Murray for the Western District of North Carolina said "today's announcement should serve as a stark reminder that no institution is too big, too powerful, or too well-known to be held accountable and face enforcement action for its wrongdoings."

The 3-billion-dollar fine accounts for about 15 percent of Wells Fargo's 19.5 billion dollars in profit last year, according to The Washington Post.