The US economy is taking a larger-than-expected hit from the partial government shutdown, White House estimates showed on Tuesday.

Economic adviser to the White House Kevin Hassett conceded in an interview with Fox that "actually the damage is a little bit worse" than initial estimates of the financial cost of the shutdown. 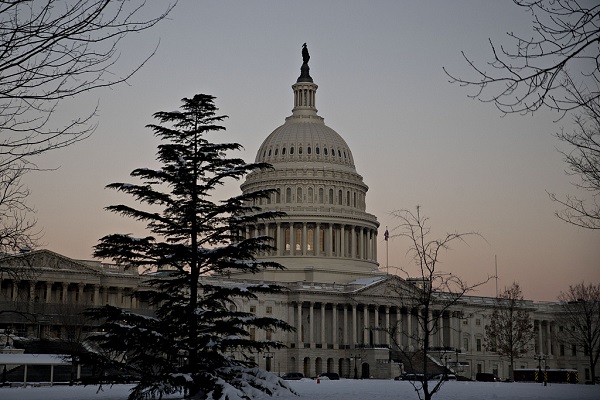 The longest shutdown in US history appears to be no closer to a resolution, with neither President Donald Trump nor Democratic congressional leaders showing signs of bending on the topic that triggered it -- funding for a wall Trump promised to build along the border with Mexico.

Trump insists Congress shell out 5.7 billion US dollars for wall funding this year, as about 800,000 federal workers go unpaid during the partial shutdown.

The Trump administration had initially estimated the shutdown would cost the economy 0.1 percentage point in growth every two weeks that employees were without pay.

But on Tuesday, there was an updated figure: 0.13 percentage points every week because of the impact of work left undone by 380,000 furloughed employees as well as work left aside by federal contractors, a White House official said.

Employment data for January is also likely to see a bigger knock than expected, with furloughed workers at home and without pay temporarily classified as "unemployed."

The effects of the shutdown have started to ripple across the country.

Beyond the 800,000 federal workers, hundreds of thousands of contractors are also being affected by the shutdown, and consumption will likely take a hit the longer it lasts.

A New York University study of the 2013 shutdown under the Obama Administration showed consumer spending by federal workers dipped by 10 to 15 percent.

According to CNN, the shutdown could also affect tourism with the closure of national parks and monuments. Approvals of new drugs are being delayed, as are flights across the country, with airport security staff contracted by the government reportedly walking away from their jobs after not being paid.

The Financial Times suggests that markets could also take a hit, with the bodies governing initial public offerings affected by the shutdown.

The financial sector is showing signs of increasing concerns, with Bank of America estimating a one percent hit to GDP growth in the first quarter if the shutdown lasts until March.

JPMorgan Chase chief executive Jamie Dimon has even said there could be zero GDP growth in the first three months of the year, depending on how much longer the situation lasts.