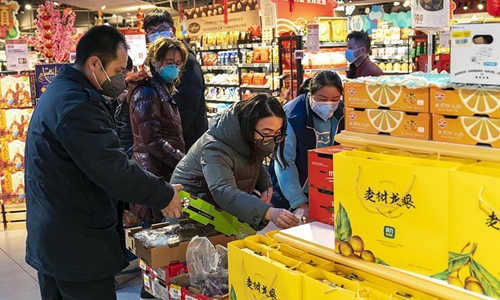 A shopping mall in Hangzhou secured deals worth 11 million yuan ($1.5 million) within five hours, as Chinese shoppers, who had been stuck at home for over three weeks due to the coronavirus outbreak, swarmed to shop with delight.

When the luxury shopping mall, Hangzhou Tower, resumed business on Thursday, its sales volume reached over 11 million yuan ($1,5 million), even though it only opened five hours on that day, local media reported, exceeding the 12-hour total sales volume in the same period last year.

The highest order on that day was a luxury watch, clinching a deal of over 350,000 yuan, media reported. Photos circulating online showed consumers queuing up at the mall's entrance, as they were let in after temperature screenings.

Chinese netizens are desperate to hang out, buy clothing, bags, and have abundant meals in restaurants, said some online users.  As the viral epidemic has compelled shopping fanatics to stay at home for weeks, experts predict, China will see a rise in retaliatory consumption at some point.

During the outbreak, shopping malls in cities have seen a sharp decrease in customers and turnover. Some remained open but shortened their business hours, and customers were mandated to get their temperature screened before entry.

Due to the impact of the coronavirus outbreak, people across China have to stay indoors and spend their days heavily relying on phones, movies, and books. The prolonged holdback could lead to a consumption impulse in a short period, Zhao Ping, director of the international trade department at the China Council for the Promotion of International Trade, told the Global Times Saturday.

The rise in retaliatory consumption would be seen once most provinces downgrade their first-level emergency response, and such a shopping spree may last to a maximum of two months, Zhao said. Liaoning Province became the second province in China to downgrade its emergency response level on Saturday after Gansu Province did so on Friday.

Affected by the outbreak, industry experts said China, as the world's second-largest personal luxury goods market, has recorded a decline in the turnover not only in the revenue of domestic  luxury brands but overseas luxury consumption among Chinese consumers also plummeted, due to the drop in outbound travel.