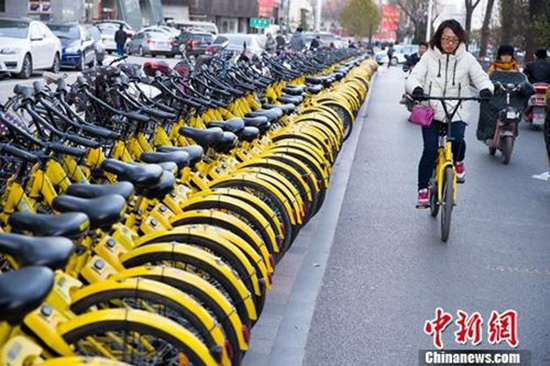 After seeing explosive growth early on, China’s sharing economy has been passing along a bumpy road as capital flow begins to recede.

1.5 billion yuan deposited by users has been lost on platforms for the sharing of bicycles, power banks and vehicles across the country within only a half year, according to a Worker’s Daily report on Thursday.

Such a loss stems from the anxiety of platform users who found it hard to protect their own interests.

Ai Chenmin, one of the earliest users of bike-sharing company Ofo, told the Worker’s Daily that he had been applying for a deposit refund for over 20 working days, but no progress has yet been made.

However, Ofo is not the only company that fails to refund deposit to users. China Consumers Association found that 34 out of China’s 70 bike-sharing service providers had gone bankrupt. Kuqi Bike, one of the bankrupted, received as many as 210,000 complaints alone, and 1 billion yuan in deposits could not be refunded to users.

A research report of Guoyuan Securities Co., Ltd. showed that the development of bicycle-sharing services hinged on capital investment. Once the capital flow stops, the users’ deposit would be moved to “rob Peter to pay Paul”.

“Shared bike was a huge convenience for the people when it first started, which drew both users and investment. However, the capital not only stimulated enterprises’ enthusiasm for the business, but also intensified competition,” said Dou Fan, a partner of a Beijing-based private-equity firm.

Statistics suggested that 190 firms in the sharing economy sector received financing totaling over 116 billion in 2017 in China, covering 11 hot-spot fields such as shared bikes, vehicles, and power banks.

However, as capital has been pulled away from the business this year, the industry is going through intense changes. As a result, many firms have even been knocked out.

As an emerging internet business, will the sharing economy bounce back without the capital?

Liu Daizong, director of China Transport Program of World Resources Institute, said that the deposit money collected by internet business is a way to prevent vandalism and maintain their running order, for which the establishment of systems for user credibility and encouragement measures could play a necessary role.

Chen Liteng, assistant analyst at China E-commerce Research Center, believes that given the limited market capacity and heavy investment in the early stage, separate directions will only lead to the decline of sharing economy and offer no way out for capital.

“If the sharing start-ups want to develop from a long-term perspective, they have to go back to the right business mode,” he said.