Will Douyin challenge Tencent and Alibaba?

The heat of short video apps in China can be a "flash in the pan" and their popularity might dwindle starting from next year, despite the fact that they are super hot currently in the country, experts told the Global Times on Sunday. 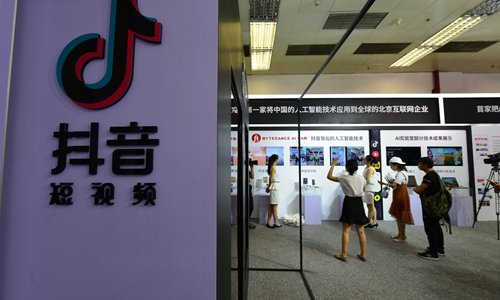 "A rising number of users is one thing, and how to monetize them is another," Guo Chengjie, an industry analyst at Beijing-based industry consultancy iResearch, told the Global Times on Sunday, adding that for short video apps like Douyin, their advertiser range is narrower than platforms like Baidu because of a narrower user base and higher-standard content.

A 20-something female surnamed Chen told the Global Times on Sunday that she mostly watches pet and gourmet videos on the Douyin app as a way to relax.

"On average I log in to Douyin once every two or three days, and watch for about half an hour or one hour each time," she said. "I feel that Douyin videos are like a window through which I can get to know other people and events, and a channel to know what is liked by people nowadays."

Liu Dingding, a telecommunications, media and technology analyst and a post-80s, said most people of his age aren't that into Douyin, but many of his acquaintances born in the 1990s or 2000s are using the app.

A Shanghai-based post-90s woman, who declined to disclose her identity, told the Global Times that sometimes she watches Douyin for three hours at a time. She mostly likes comedy videos, and sometimes she would even shoot short comedy videos herself and upload them to Douyin, she said.

According to media reports, some children as young as three years old are watching Douyin videos and copying their actions.

To cater to the younger generations, many State-owned companies, such as the China National Nuclear Power Co, have opened Douyin accounts as a publicity channel.

The Financial Times reported on June 25 that Douyin is one of those "rare" start-ups "with a shot at" challenging China's biggest technology companies.

ByteDance CEO Zhang Yiming disclosed on Friday that currently Douyin has more than 300 million monthly active users, according to media reports. In comparison, WeChat and QQ, two of Tencent's star products, had a monthly active user base of 1.04 billion and 805 million respectively by the end of the first quarter.

"In the online video sector, it's possible that Douyin might surpass Tencent or Baidu. But for Tencent and Alibaba's strong fields such as social networking and e-commerce, it's unlikely Douyin can beat them," Liu told the Global Times on Sunday.

Guo Chengjie, an industry analyst at Beijing-based industry consultancy iResearch, said that Tencent has launched its own short video app called weishi, but apparently its popularity lags that of short video apps like Douyin and Kuaishou.

Guo said that what is outstanding about Douyin is its fast growth as a start-up. "But in terms of overall influence, Douyin still can't stand in the same league as Tencent or Alibaba, both of which have established a business ecosystem with various sectors, while Douyin and similar companies still have a one-business model."

Liu also said that for e-commerce and social networking, Douyin can complement the relevant businesses of Alibaba and Tencent, but it won't be able to replace them in those sectors.