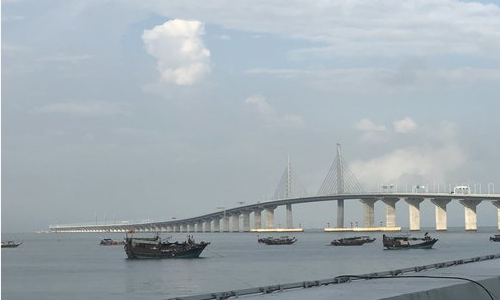 The integration of the financial markets in Shenzhen, South China's Guangdong Province, with those of the Hong Kong Special Administrative Region (HKSAR), under a master plan recently issued by the central government, will cement the latter's role as an international financial hub while also spurring innovation of the former's financial markets, local industry players said.

But they warned that if riots persist in the HKSAR, the city may lose its glamour and yield some key financial services to its rising neighbor Shenzhen in such sectors as fundraising for technology start-ups and the internationalization of the yuan.

"We welcome all new policies that benefit our market in the long term," Qian Jie, assistant vice president of corporate communications of the Hong Kong Exchanges and Clearing (HKEX), told the Global Times.

China released a guideline on August 18 that aims to build Shenzhen into a pilot demonstration area of socialism with Chinese characteristics.

"Shenzhen is home to a number of vibrant technology start-ups that need financing… This means a great opportunity for Hong Kong, not only in terms of retaining and propelling the prosperity of Hong Kong's capital market but also in optimizing the asset portfolio of Hong Kong international investors," Qi Mingyang, chairman of Shenzhen-based asset management firm Fortune Valley Capital Investment Group, told the Global Times on Tuesday.

As Hong Kong's economy is small, its stock exchange has largely thrived on IPOs by companies based in the Chinese mainland in past years, industry insiders said. As of the end of July, 1,205 mainland-based companies were listed in Hong Kong, accounting for 68 percent of the market's total capitalization, data from HKEX showed.

"Capital from the Chinese mainland has also brought new liquidity to our market, boosting the competitiveness of Hong Kong as an international financial center," Qian said.

The opening-up of Shenzhen will attract more foreign institutions to the mainland via investment channels in Hong Kong, further lifting the HKSAR's position as a financial center, Qi said.

However, some industry observers pointed out that a stable and orderly Hong Kong is the foundation for the city to benefit from Shenzhen's ascent in the national strategy.

"In the past, Hong Kong was a gateway for the mainland to connect to the world. Now, Shenzhen is making its own history amid violence and riots in Hong Kong," Qi said. He urged companies in the two cities to join hands to grasp the "historical opportunity" to make money from closely linked markets.

Beijing does not aim to have Shenzhen replace the financial role of Hong Kong. But if unrest continues in the HKSAR, Shenzhen could be a strong competitor, a Shenzhen-based industry insider close to the matter told the Global Times on condition of anonymity.

"We were informed by the provincial government this year that Shenzhen and Guangdong's capital Guangzhou should not be viewed as competitors. Then, which city will Shenzhen be a rival to as Shenzhen and Hong Kong enjoy equal policy support?" the source said.

In 2018, Shenzhen surpassed Hong Kong in terms of GDP to become the largest economy among cities in the Greater Bay Area.

The southern city will "walk ahead" with experiments on pushing the yuan's liberalization, read the guideline.

Industry players forecast that under the plan, caps on cross-border capital transactions could be relaxed further, allowing more money to flow freely in both directions. That means Shenzhen could rival Hong Kong, which is the most important offshore yuan trading center in the world.

The guideline also noted that the government will push forward registration-based IPO reforms in Shenzhen.

Peng Chao, the managing partner of Shenzhen-based Grandway Capital, told the Global Times on Tuesday that technology companies may choose to list in Shenzhen instead of in the HKSAR if the local capital market opens further. They will also have higher valuations in the domestic market.

"Top internet participants like Alibaba will also be popular with domestic capital as these companies are rare in the mainland market," Peng said.

But "cooperation rather than competition is still the main theme" in the Greater Bay Area, Qi said. "Hong Kong plays an indispensable role in improving the weaknesses in Shenzhen's capital market."

For example, the two cities could work together in exploring innovative cross-border financial management. "Hong Kong's legal framework for financial supervision has gained international recognition. Regulators in adjacent Shenzhen could borrow from the HKSAR's experience and launch pilot programs," he said.