Flags are pictured during the fifth round of NAFTA talks involving the United States, Mexico and Canada, in Mexico City, Mexico, November 19, 2017. REUTERS/Edgard Garrido

MEXICO CITY (Reuters) - Talks to update the North American Free Trade Agreement appeared to be in danger of grinding to a stalemate amid complaints of U.S. negotiators’ inflexibility, people familiar with the process said on Sunday.

The United States, Canada and Mexico are holding the fifth of seven planned rounds of talks to modernize NAFTA, which U.S. President Donald Trump blames for job losses and big trade deficits for his country.

Time is running short to reach a deal before the March 2018 start of Mexico’s presidential elections, and lack of progress in the current round could put the schedule at risk.

“As long as the United States is taking the position they are, this is a colossal waste of time,” said Dias, who is advising the government and regularly meets the Canadian team.

Hanging over the negotiations is the very real threat that Trump could make good on a threat to scrap NAFTA.

Canada and Mexico object to a number of demands the U.S. side unveiled during the fourth round last month, including for a five-year sunset clause that would force frequent renegotiation of the trade pact, far more stringent automotive content rules and radical changes to dispute settlement mechanisms.

“Our internal view as of this morning is that if any progress is to be made, the United States needs to show some flexibility and a willingness to do a deal,” said a Canadian source with knowledge of the talks. 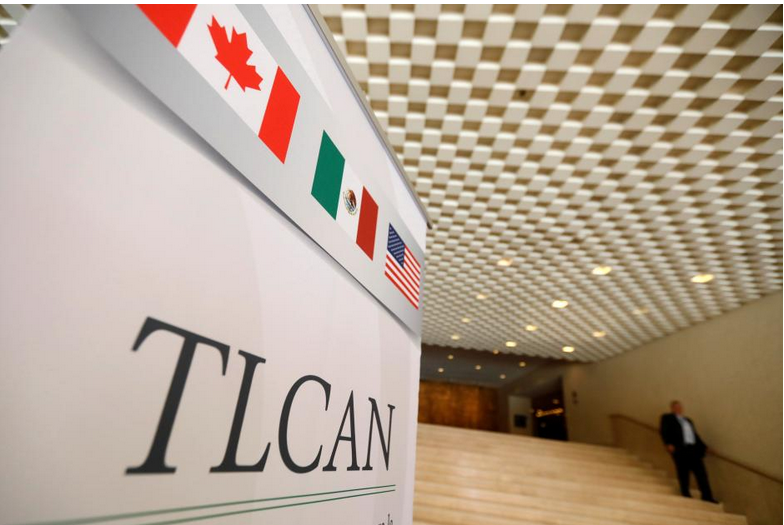 A NAFTA banner is seen during the fifth round of NAFTA talks involving the United States, Mexico and Canada, in Mexico City, Mexico, November 19, 2017. REUTERS/Edgard Garrido

“We are seeing no signs of flexibility now,” added the source, who requested anonymity given the sensitivity of the situation.

Dias said the United States was showing some signs of flexibility over its sunset clause proposal after Mexican officials floated a plan for a “rigorous evaluation” of the trade pact but without an automatic expiration.

U.S. negotiating objectives that were updated on Friday appeared to accommodate the Mexican proposal, saying the revised NAFTA should “provide a mechanism for ensuring that the Parties assess the benefits of the Agreement on a periodic basis.”

Canada and Mexico are also unhappy about U.S. demands that half the content of North American-built autos come from the United States, coupled with a much higher 85 percent North American content threshold. Officials are due to discuss the issue from Sunday through the end of the fifth round on Tuesday,

A source close to the negotiations said the Mexicans had no intention of making a counter offer on autos content because “there is a structural problem ... in the way the subject is being addressed.” Mexico, the source added, felt the U.S. demand was not viable.

Flavio Volpe, president of the Canada’s Automotive Parts Manufacturers’ Association, said there was little chance of making substantial progress on autos in Mexico City, as the U.S. demands were still not fully understood.

“I don’t expect a heavy negotiation here,” he said in an interview on the sidelines of the talks.