BUSINESS With no GDP target, fundamentals in focus

With no GDP target, fundamentals in focus 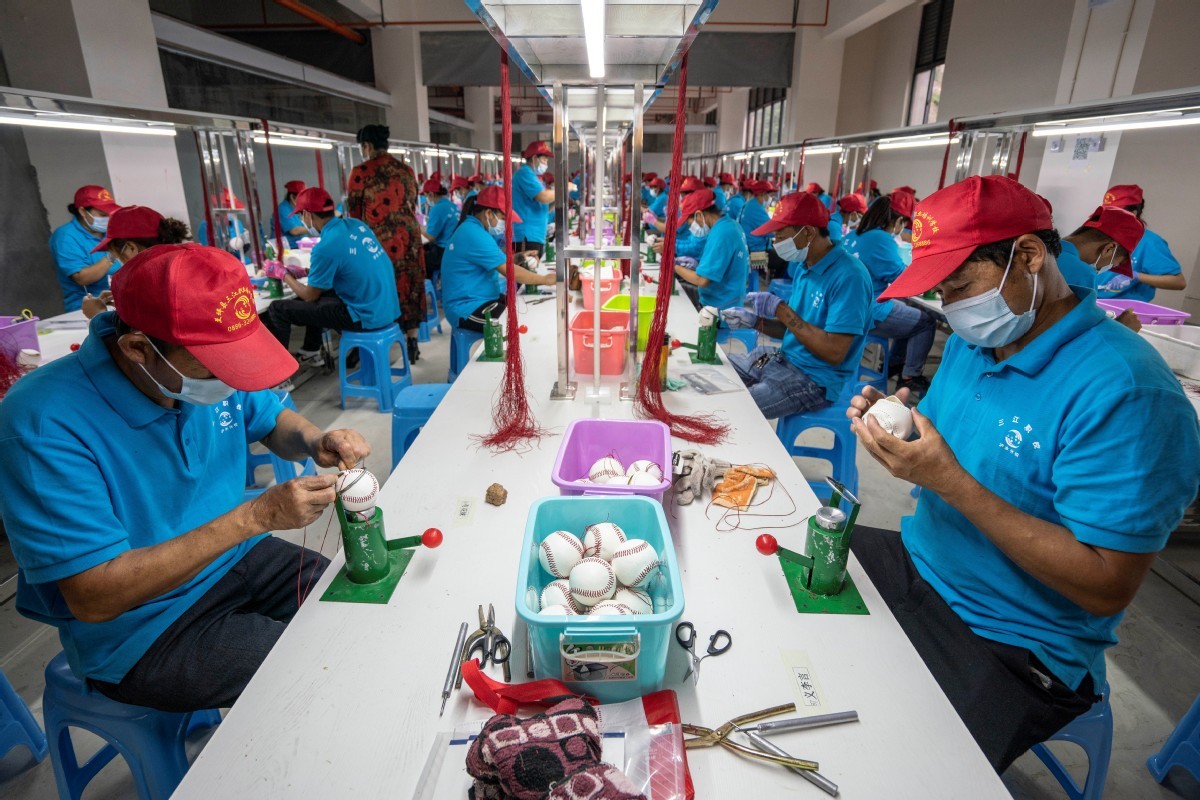 Workers make baseballs at a factory in Yunnan province in May. It's one of the local poverty-reduction programs to better safeguard people's livelihoods, one of the issues the country emphasizes for steady economic momentum. (Photo: Xinhua)

Although China has not set a full-year economic growth target for this year, authorities are still focused on seeing the national economy embrace stability and reform.

Considering the exceptional circumstances this year, Chinese leaders made the right decision to drop the GDP target for the year. Instead of setting such a target and working toward realizing it, the government will better safeguard employment, people's livelihoods, the development of market entities, food and energy security, stable operation of the industrial and supply chains, and the smooth functioning of society.

By not setting China's specific economic growth target for 2020, we will concentrate more on people's livelihoods and ensure that the Chinese economy is seeking progress while maintaining stability. If an annual growth target were announced in this special time, government officials would have been concentrating on the target and whether or not it could be met.

Under the current economic situation, the overall social and economic benefits will improve only after we do well in maintaining employment stability and ensuring people's livelihoods.

Scrapping the growth target this year does not mean that China will cease reform and opening-up, supply-side structural reform or high-quality development. On the contrary, it signifies clearer goals need to be achieved.

Due to shocks to the global economy brought by the outbreak of novel coronavirus pneumonia this year, the global industrial and supply chains have become highly vulnerable.

Given the circumstances, China must strive to expand domestic demand and tap more deeply into domestic consumer market potential, which has yet to be realized through higher-quality economic development and greater reform and opening-up. In this sense, the economic target is clearer than before, and the requirements are actually higher.

China's new Foreign Investment Law came into effect on Jan 1. To attract more foreign investment in a short time, we must create the world's best business environment. This requires equal treatment of foreign-invested, State-owned and privately-owned companies as well as a fair, open and transparent market-oriented economy based on the rule of law. In addition, we must step up the opening-up of the overall industrial and supply chains to build an open, stable and safe environment.

As a result, our tasks are heavier this year, but we have confidence in completing them.

A pressing issue at the moment is to safeguard jobs as addressing this is most helpful in solving the problems facing the Chinese economy.

Efforts to keep employment stable should focus on micro, small and medium-sized enterprises (MSMEs) which have weak risk resistance capacity due to a general lack of large assets, large equipment and large amounts of capital.

During the resumption of work and production in the previous months, some MSMEs dealt with challenges such as restricted personnel flows, raw material price hikes and logistics limitations, in addition to finding ways to pay rent, salaries and loans. The government should pay attention to all these problems. 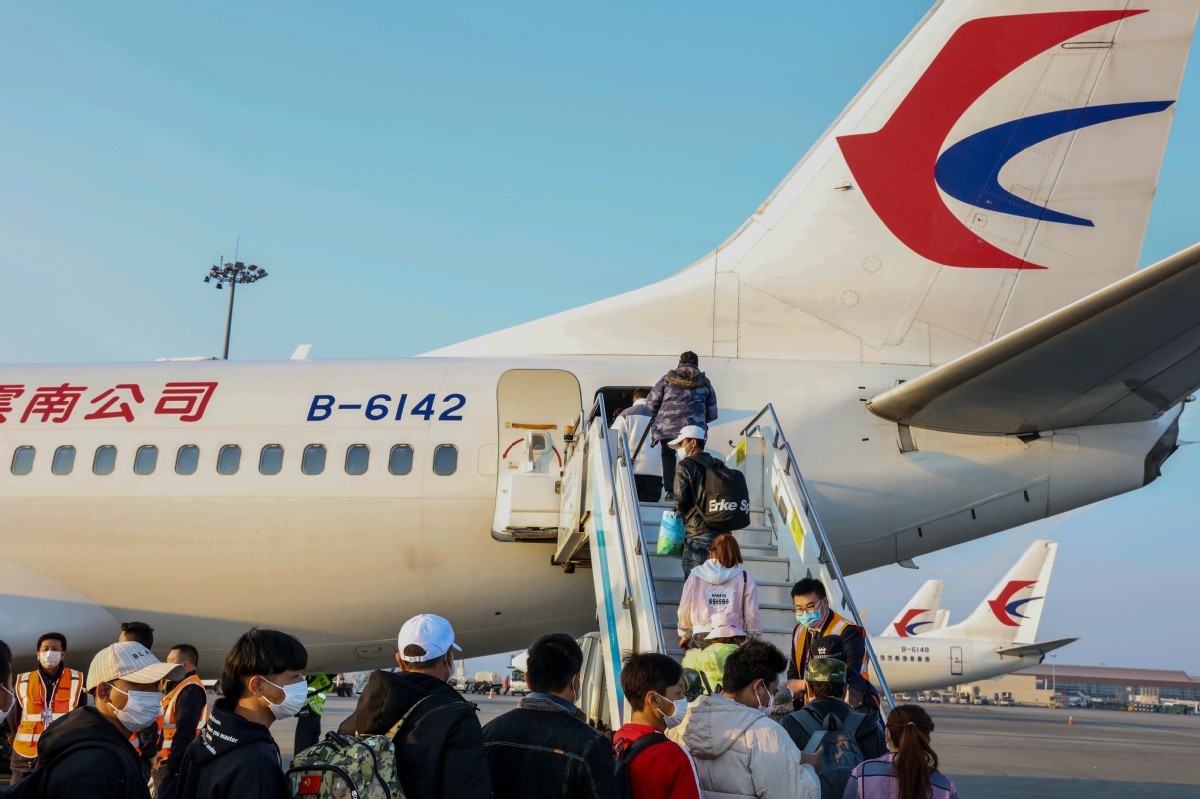 With the help of government, migrant workers in Yunnan take a chartered flight back to Shandong and resume work, on Feb 26, 2020. (Photo: Xinhua)

Amid the novel coronavirus outbreak, we realized that China has not yet reached a high level of economic development. This is mainly manifested by the fact that construction of the market-oriented economic system－including factors of production, personnel, resources and asset allocation－still lags behind.

We will drive overall social development with high-quality economic development when the pandemic ends. If we do a sufficiently good job in stabilizing employment and ensuring people's livelihoods, MSMEs will be full of vitality and able to overcome more challenges. The key to ensuring people's livelihoods is to safeguard MSMEs which make up over 80 percent of urban employment in China.

Furthermore, we should focus on stimulating domestic demand while increasing the level of opening-up to the outside world at the same time.

China should drive economic development by boosting consumption, employment and livelihood development via the internal market amid the current global economic recession and market downturns. Policymakers should make a firm decision regarding this matter.

It is necessary to stimulate consumer markets more rapidly so that MSMEs and export-oriented enterprises will turn to the domestic market this year and gain more room for maneuver.

It is also important to ramp up efforts to deepen reform and opening-up and further promote high-quality development－that is to say, the implementation of supply-side structural reform.

We should eliminate inefficient enterprises that do not meet the current economic development needs and give priority to the development of industries which are of great help in promoting exports and high technologies, including new materials, cloud computing and smart manufacturing industries. I believe the government will launch more policies in the second half of this year.

Chinese domestic demand has huge growth potential. Effectively combining the increase of consumption and investment will be a breakthrough for deepening supply-side structural reform.

To be specific, we will promote the recovery of consumption, ensure people's livelihoods by stabilizing employment and expand investment, thus ensuring that overall economic development is stable.

The above proposals were mentioned in the 2020 Government Work Report, which said the country will steadily advance new urbanization and speed up the implementation of its regional development strategies.

In addition, we should step up reform efforts to break down institutional barriers when the pandemic is over.

Under the current circumstances, past practices cannot stimulate the vitality of market entities to the full or enhance new drivers of growth. Therefore, we will promote market-based allocation of production factors, accelerate reforms of State-owned enterprises, step up administrative streamlining and delegate more authority so that MSMEs will be treated equally.

We will also continue to build a market-oriented, internationalized business environment based on the rule of law and promote development of the new manufacturing economy.

Offering specific plans and solutions, the 2020 Government Work Report pointed out the direction of development and created a road map and a timetable. Attaching great importance to people's livelihoods, the report will boost market confidence and promote economic development.

The writer is vice-chairman of the China Center for International Economic Exchanges and former vice-minister of commerce.