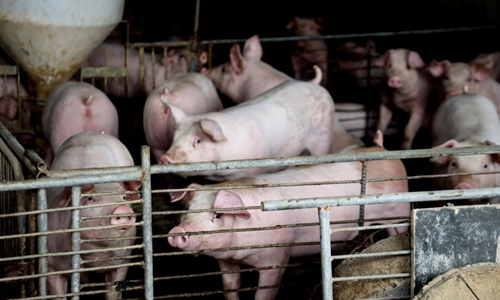 Property developer China Vanke Co has posted a recruitment notice for hog-raising talent, a move which confirmed market rumors that the Chinese real estate giant is going to follow in the steps of some of its peers, like Evergrande, to raise hogs.

According to the recruitment notice, Vanke is recruiting people for several hog-raising related positions including veterinarians, pig farm managers and construction application specialists. The staff will work for Vanke's food business division.

The recruitment has confirmed market speculation that Vanke is broadening its business avenues to raise hogs since Vanke's chairman reportedly asked Liu Yonghao, chairman of agribusiness company and hog-raising giant New Hope Group how much money Liu made in raising hogs in 2019.

"It might be a strategy of Vanke to multiply its business fields at a time when its major business, property development, is facing a development bottleneck," Jiao Shanwei, editor-in-chief of cngrain.com and an agricultural expert, told the Global Times on Saturday.

To some extent, Vanke's move is not surprising as some of its peers have already made the same decision. Property giants Country Garden and Evergrande have also set up animal husbandry companies to raise hogs.

Besides property companies, e-commerce giants like Alibaba and NetEase also jumped to the new bandwagon in raising hogs.

However, Jiao said that such a"crossing over" is not guaranteed a profitable endeavor in the end as many people had anticipated.

"It's true that some companies made a lot of money off raising hogs when the pork price surged last year, and raising one hog could bring a profit of 1,000 yuan ($142) in some cases, but the trend might not last because hog-raising is a very cyclical industry," Jiao said.

According to him, the current supply of pork still can't meet market demands in China and the prices keep elevated. But with more people changing their dining habits and finding alternative meat for pork, hog raising business may entail economic loss.

"Also, many animal husbandry industry magnates have laid out large-scale hog-raising farms in recent years, so the market competition is going to be very fierce," Jiao said.