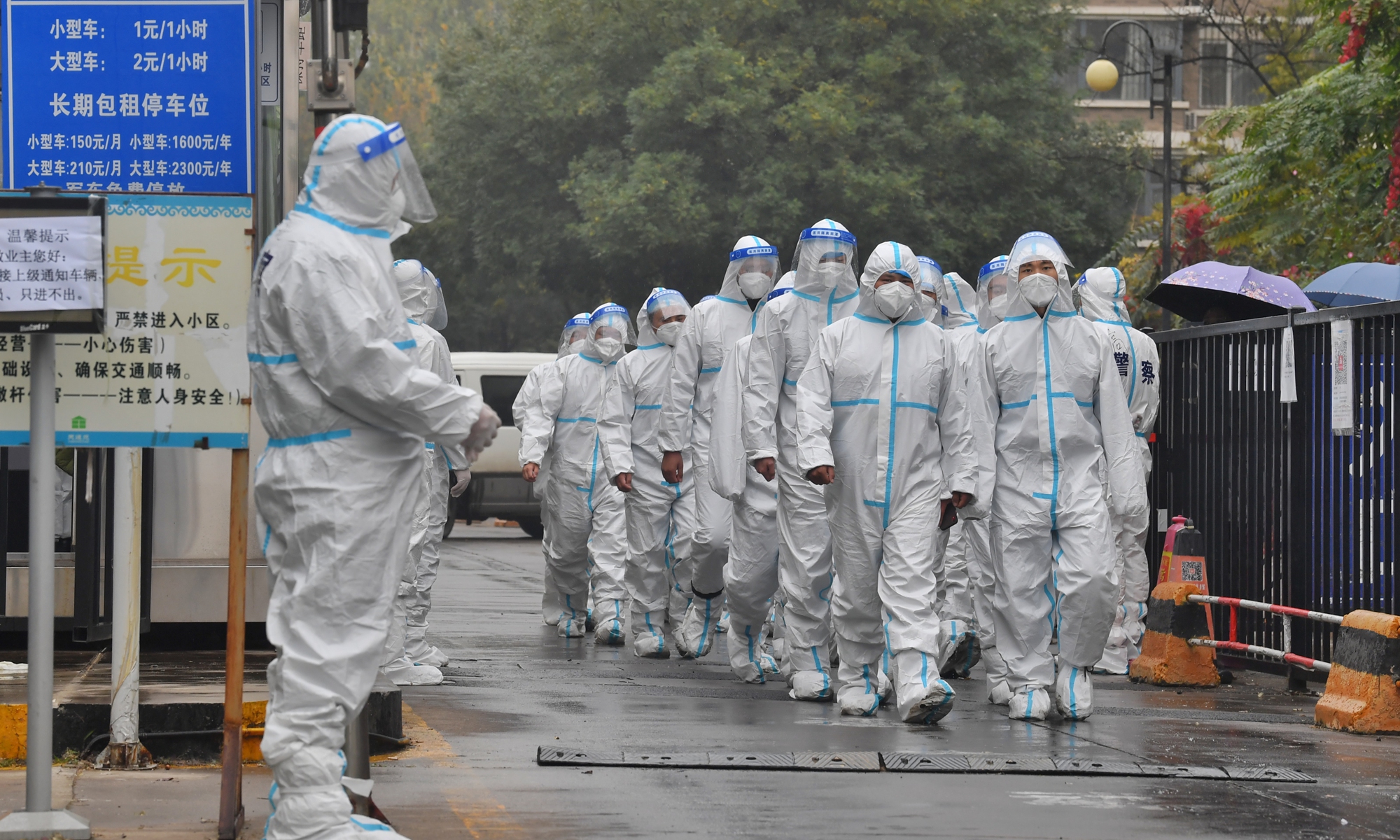 Security personnel in protective clothing march in a residential community in Tiantongyuan, Beijing on November 2, 2021. The community has taken closed management measures after reporting four new COVID-19 cases. Photo: I

Sales of wool products from North China's Inner Mongolia Autonomous Region have been disrupted amid a recent flare-up of coronavirus in the region. Authorities of different places across China, including Beijing, have issued notices to remind residents to take precautions upon receiving packages.

A manager of a wool products factory in Hohhot, capital city of the Inner Mongolia Autonomous Region, told the Global Times on Tuesday that there were no barriers when the company shipped items out of the autonomous region.

"Some of our customers were hesitant to place orders or even suspended them when they learned that we dispatch our products from Hohhot, even though it is over 600 kilometers away from Xilin Gol League (where the outbreak started)," said the manager.

A resident surnamed Zhao in Beijing said she had bought two wool shirts from an online store during the Chinese Double 11 shopping festival and the parcels are still on the way.

"I paid special attention to the dispatch place of the wool shirts that it was not from the Inner Mongolia Autonomous Region, in order to avoid possible infection risks," said Zhao. But she mentioned that she always spray disinfectants before opening parcels.

The Inner Mongolia Autonomous Region is famous for its wool cloth and textile products made with locally produced fine wool. The latest COVID-19 outbreak affected the operations of multiple local enterprises.

A wool products store on Taobao, a Chinese e-commerce platform, said it had halted shipments from its factory in Ordos city, Inner Mongolia Autonomous Region, and shifted to a physical store in East China's Shandong Province to overcome possible logistics delays due to the latest COVID-19 outbreak.

On Monday, a residential community in Haidian district, Beijing, was put under closed management after the outer packaging of a parcel delivered to a resident there from the Xilin Gol League tested positive for COVID-19. Nucleic acid tests have been taken of all relevant individuals and the environment, Beijing Youth Daily reported.

In addition, some netizens in Shanghai on Tuesday said on social media platform Xiaohongshu that they were ordered by local authorities to take nucleic acid tests for COVID-19 after they received wool shirts sent from Xilin Gol League.

The Beijing Municipal Postal Administration announced on Tuesday that parcels from middle- and high-risk areas must be quarantined after arriving at the distribution center in Beijing. The supervisor also said parcels that have not been quarantined will not be distributed.

Xu Xiangzhong, manager of a home textile trade company in Xilinhot City, told the Global Times on Tuesday that sales of his products were not affected but all packages will be quarantined in advance before being sent out of the city.