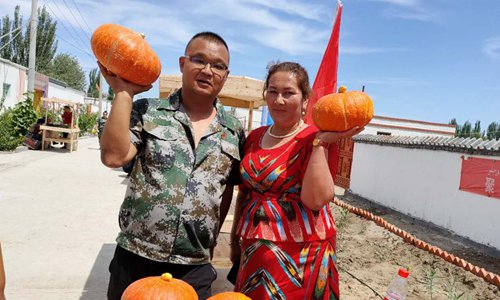 The happiest thing for Chen Zhiliang, vice director of a working group stationed in Yusituke Ayikule village, Awati county in Aksu Prefecture in Northwest China's Xinjiang Uyghur Autonomous Region, is to see villagers get out of poverty and live a happy life.

The village had been plagued by extremism. Rumors had spread saying that pills distributed to villagers to prevent poliomyelitis were actually contraceptive medicines. Impoverished people were often too scared to pick up their subsistence allowances because of threats from extremists, according to local officials.

Local working groups stationed in villages have made great efforts to eliminate the influence of extremism, through measures such as promoting national laws and regulations. To lift villagers out of poverty, Chen and other members of the group work together with the villagers. These efforts include using more scientific ways of planting crops and commercial crops, including fungus, walnut and red dates.

The working group has invited agro-technicians from Urumqi to give lectures to local farmers, cultivate the vegetables in their seeding stage, harvest vegetables with villagers and help contact buyers.

According to data from the working group, 47 households that planted tomatoes in 2018 have earned more than 73,000 yuan. A total of 140 tons of tomatoes grown were all sold.

Chen said that the working group also encourages villagers to make money through "agritourism" - welcoming tourists to pick fruits on farmland and offering accommodation to increase their income.

"A total of 60 households have reconstructed their yards so that they can house more customers. We also held a fruit and vegetable picking festival to celebrate the harvests and attract more tourists in July, which brought 100,000 yuan in income to farmers," Chen said.

Chen said that one tourist paid 13,000 yuan in cash to buy walnuts from one villager. He later posted the video of the deal on his WeChat, which received many "likes."

According to Chen, the average yearly income of one household in the village has increased to between 30,000 yuan and 40,000 yuan in 2018. At the end of 2018, all poverty-stricken people had been lifted out of poverty.

"We are now making efforts to cement these achievements. We work with companies to provide jobs to more villagers in case some return to poverty," Chen said.

The working group has also thought of an incentive method to encourage villagers who, under the influence of extremism, are less motivated to rid themselves of poverty - a public rating form that praises villagers who earn more through diligent work and allows them to win awards.

"We can hold group activities in the pavilion," Chen said, noting that the working group can also treat villagers to tea and snacks when they come here or help organize exchanges between villagers and college students who come back to the village during holidays.

Chen and the other members of the working group usually work for at least nine hours a day and sometimes also have to work on weekends, but no one complains about this.

"I want to work in the village to lead more villagers to live wealthy and happy lives. Seeing their smiles are the happiest thing for me," Chen said.