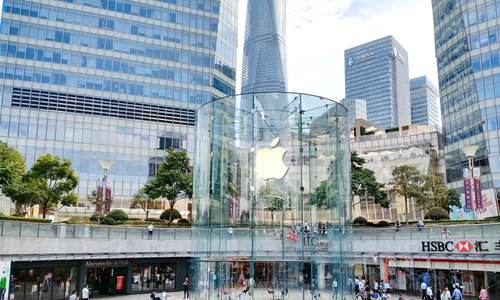 A view of a shopping mall in Lujiazui, Shanghai in September. (Photo: VCG)

China's efforts to improve its business climate have made it much easier to become an entrepreneur in the nation, whose fast progress demonstrates that it can achieve any reforms it sets its mind on, foreign experts said.

"Within Doing Business indicators, a lot of progress has been made in starting a business. The number of steps, costs and time spent have come down dramatically. This means it is much easier now to become an entrepreneur in China," Bert Hofman, director of the East Asian Institute at National University of Singapore, told the Global Times on Thursday.

China's progress is also in the media limelight.  The Financial Times quoted Simeon Djankov, director of development economics at the World Bank as saying that "China improved its position by digitizing government services," where people can set up a company, pay taxes and get licenses online.

Over the past several years, China has implemented a series of measures to facilitate tax payments. In Doing Business 2006, using tax payments as an example, businesses in Shanghai generally spent 832 hours each year to prepare, file and pay taxes, and they had to make 37 payments, but the latest report showed they now only need to spend 138 hours, according to the World Bank report.

China launched an internet+taxation initiative in 2015, which unleashed the potential of big data for taxpayer services. The Golden Tax III system introduced in 2017 further facilitated the e-filing of different stamp duties, the report noted.

However, some have claimed that China's business environment is deteriorating amid the prolonged China-US trade war. Reuters reported in August that many US companies are concerned about their ability to compete in China, saying that China offers advantages to its domestic companies while it imposes licensing, investment and administrative barriers on foreign companies.

"When we first came to China in 2007, it was difficult to get licenses and many industries were restricted from foreign firms. But the [Chinese] market is increasingly open and organized. We now operate 500 shops at China's airports and railway stations," Fabre said.

"Foreign companies should reflect on their own problems, for example, whether they're flexible enough to market changes and whether they adapt their strategies in line with the Chinese market," Fabre said.

To further improve the business climate, the State Council, China's cabinet, on Wednesday made public a regulation on optimizing the business environment.

The World Bank's report "is a vote of confidence on China's reform and opening-up as well as the country's economic prospects," Foreign Ministry spokesperson Hua Chunying said at a regular press briefing on Thursday, noting that the report has a positive role in uplifting market confidence amid slower global economic growth and growing uncertainties.

The structural reforms that Doing Business tries to capture are key for China's growth, Hofman said, noting that they are key to productivity growth and the entry of new private companies, which will drive China's  innovation.

"China's rapid progress in the past two years is remarkable, and it demonstrates that the country can achieve any reforms it sets its mind on," Hofman  said.

As the advocate and promoter of an open world economy, China always sticks to development with its door open, Hua said.

China will continue to implement measures to take its opening-up to a higher level, as well as "welcome more foreign companies to invest and set up businesses in China and share China's opportunities," Hua said.