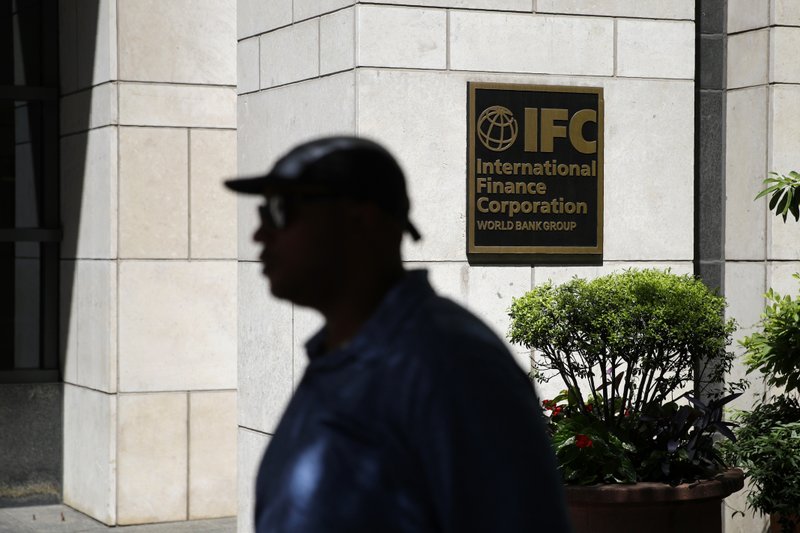 In this June 12, 2019, photo, a man walks past an entrance to the International Finance Corporation, a unit of the World Bank Group, in Washington. (Photo: AP)

As an investment officer for a World Bank unit, it was her job to help the government set the terms for competitive bidding by contractors. It turns out she was also married to a senior executive of a company that won part of the very contract she helped to oversee.

That apparent conflict of interest has now dragged the bank into the edges of Latin America’s biggest corruption scandal, as revealed in a little-noticed report issued last year by Colombia’s anti-trust agency.

The Grupo Aval conglomerate that employed Guarín’s husband was partnered with Odebrecht, the Brazilian construction giant that has admitted to paying $6.5 million in bribes to seal the deal — one of dozens of projects it now acknowledges winning through illegal payments.

The scandal upended the region’s politics, leading to the jailing of dozens of senior politicians. But the role played by the World Bank in advising governments during the graft-ridden infrastructure boom of the past decade has received far less attention.

The private-sector arm of the World Bank, known as the International Finance Corporation, or IFC, is supposed to reduce poverty in the developing world by promoting private investment.

In an antitrust administrative complaint filed in September against Guarín and several others, the IFC is accused of failing to act on Guarín’s potential conflict of interest for nearly two years, even as she allegedly tilted the bidding process for part of the $2.6 billion contract in favor of her husband’s employer.

Her husband, Diego Solano, who was also implicated, is now the chief financial officer of the New York Stock Exchange-traded company.

If the civil charges of taking advantage of a conflict of interest and improper contacts are sustained, Guarín faces a fine of up to $1 million. Aval and its subsidiaries are on the hook for $150 million.

“There’s no doubt that the IFC conspired against free competition and transparency,” Pablo Robledo, the former antitrust regulator who led the probe, said in an interview.

No one has been criminally charged, nor are there any indications that Guarín and Solano financially benefited. But a judge in April asked Colombia’s attorney general to investigate the couple in handing down an 11-year sentence against José Melo, the CEO of the Aval unit in the consortium.

During Melo’s trial, a former deputy transportation minister jailed for accepting bribes testified that he was led to believe by Odebrecht’s country manager that the company had already influenced the structuring of the bidding terms through Guarín.

In a 2016 plea agreement with the US Justice Department, Odebrecht admitted to paying almost $800 million in bribes to win contracts in 12 mostly Latin American countries.

At the time of the highway project, multinational companies were recovering from the global financial crisis and wary of investing in a country where an armed conflict with leftist rebels was still raging. The IFC’s mission was to help the government attract as much interest as possible.

The IFC allegedly stood by as the husband’s employer actively sought to take advantage of the conflict of interest, according to the antitrust agency’s findings. Among other alleged improprieties was the organizing of a lunch between Guarín, her husband and Melo. The meeting was to take place in January 2009 — weeks before the bidding conditions were made public.

The contacts continued after the monthslong tender process officially got underway. That’s when, according to the antitrust regulator, strict rules were in place to make sure communications with the government or its advisers were transparent and all bidders had equal access to information.

It was during this period that Guarín in an email urged the government to lower the collateral requirements for bidders. She argued that she was informed privately by an Odebrecht executive that the high amounts represented a “deal breaker.”

A month later, the requirements were changed.

“The gold standard that should characterize the IFC’s behavior in accordance with the World Bank’s code of ethics clearly was not followed,” said Camilo Enciso, a criminal lawyer and director of the International Anti-Corruption Institute, who reviewed the documents in the case at the AP’s request. “The couple had a clear stake for their careers in the success or failure of this project.”

Potential conflicts of interest “were everywhere,” he added, citing the use of confidential information, influence peddling and favoritism, among others. “The IFC should have known better.”

Guarín and Solano declined to comment. But in case filings both rejected the allegations of a conflict of interest. While Solano argued that he took steps to insulate himself from the bidding process, Guarín said the lowering of the financial guarantees benefited all bidders and reflected longstanding concerns across the sector.

Aval said it was cooperating with authorities but declined to comment further.

The IFC also rejected the accusations, saying that Guarín was hired before it was known who the bidders would be and because of her expertise in the infrastructure sector. She was member of an extensive team and did not have a managerial role.

The IFC also said it notified the government and put in place safeguards to prevent any conflict of interest once news reports in July 2009 indicated Aval would take part in the bidding process. That was more than 20 months after the IFC started advising the government.

“As it is the norm in these projects, IFC only served in an advisory capacity while the ultimate decisions regarding the project structure and the awarding of the concession contract rested exclusively with the Colombian government,” the IFC said in a statement.

The safeguards included preventing Guarín from playing any role in the bid evaluation process.

But in a September 2009 public hearing, Colombia’s then-Transportation Minister expressed surprise upon hearing of Guarín’s marriage to an Aval executive in an anonymously written complaint that described the relationship as a “perfectly camouflaged conflict of interest.”

Richard Cabello, head of the IFC’s advisory services in Latin America, said the organization had taken unspecified steps from the outset to mitigate any possible negative effects arising from Guarin’s marriage, according to a transcript of the hearing.

He also vowed to answer the “innuendo” in writing — although there’s no record the IFC did so publicly until almost eight years later, in response to a magazine column. In the 2017 statement, the IFC said it flagged the issue to the government a month before the hearing in coordination with an IFC department charged with managing potential conflicts.

Cabello, like the IFC, “downplayed what took place and provided impertinent excuses that didn’t address the heart of the complaint,” the antitrust agency said in the 168-page report issued in September.

The antitrust agency said the IFC refused to cooperate with its investigation, citing its immunity from judicial processes as an international organization. As such, it concluded that no action was taken to address the conflict.

The IFC claims it volunteered to work with the government to clarify circumstances related to the project. Meanwhile, an attorney for Aval has accused the regulator of abusing its authority by accessing company emails without a court order and questioning Solano without a lawyer present. Colombia’s ombudsman has launched an investigation against Robledo in response.

Two days after the hearing, Aval sent a letter to the government stating that Solano, then a senior executive, did not play any role in the process, despite emails suggesting he had had.

Solano in a filing said his involvement was limited to helping structure a memorandum of understanding with Odebrecht and measuring the potential impact of a winning bid on Aval’s finances. He also said the antitrust regulator ignored an August 2009 email in which he explicitly asked Melo to refrain from sending him confidential information about the offer.

Nonetheless emails show that Aval’s president, Luis Sarmiento, the son of Colombia’s wealthiest man, was aware of the issue and urged caution so that a winning bid would not be undone by a lawsuit.

Despite the risks, the lobbying effort appeared to pay off, according to the antitrust regulator.

When the results of the bidding were announced Dec. 14, 2009, the only two other competitors were disqualified on technical grounds. The Odebrecht-Aval consortium was awarded the contract for about $1 billion, just below the maximum allowed, suggesting it did not fear being outbid.

Years later when Melo retired, he sent a farewell email to his colleague Solano. “Please send my regards to Maria Victoria,” he wrote, “she’s secretly always been our booster.”