A plunge of the Turkish lira to record lows sent shivers through global markets Friday as investors started to worry about contagion, especially for the European banking sector. 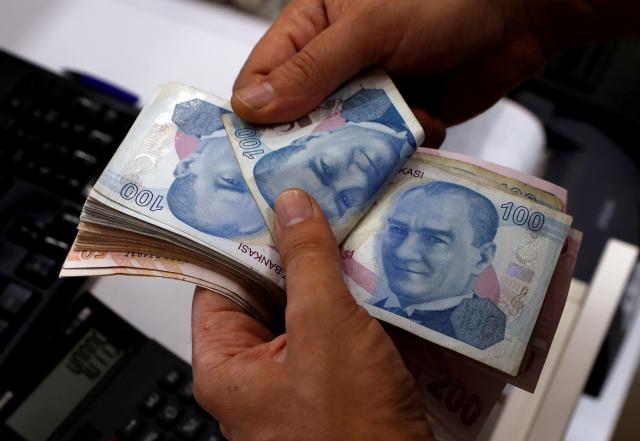 "For some time now investors have been looking at the unfolding currency crisis in Turkey as a local difficulty," noted CMC Markets UK analyst Michael Hewson.

"However, the accelerating speed of the declines appears to be raising concerns about European banks' exposure to the Turkish banking system."

The lira was buffeted by a diplomatic row between Ankara and Washington, with Turkish President Tayyip Erdogan's attempts to talk up the currency having exactly the opposite effect.

"The plunge in the lira which began in May now looks certain to push the Turkish economy into recession and it may well trigger a banking crisis," said Andrew Kenningham, chief global economist at Capital Economics.

European banking stocks plunged, the euro weakened while demand for safe haven assets gold and the Swiss franc picked up as analysts realised that the lira's plunge was not just a local Turkish problem.

But neither should global investors over-react, suggested Kenningham, noting that Turkey accounts for just one percent of the world economy, slightly less than the Netherlands, making it not much of a risk to the world economy, or even the eurozone.

Still, analysts said the lira's plunge which took it down nearly 20 percent against the dollar on the day in the European afternoon, was dramatic, with analysts trying to recall when they last saw anything like it.

"The last time I can remember a currency exploding into a similar acceleration of weakness to what we have seen in the past 24 hours is the Russian Ruble crisis that transpired late in 2014," said Jameel Ahmad, head of currency strategy at FXTM.

And the fall may not be over.

"It is astonishing that no matter how punished the Lira looks, traders are showing absolutely no indication that they are finished with pricing in 'bad news' into the market," Ahmad said.

The European single currency meanwhile tumbled to its lowest level in a year on concerns about eurozone exposure to the crisis in Turkey.

Concerns were amplified Friday by a report in the Financial Times that the supervisory wing of the European Central Bank (ECB) had over the last week begun to look more closely at eurozone lenders' exposure to Turkey.

The report said the situation is not yet seen as "critical" but Spain's BBVA, Italy's UniCredit and France's BNP Paribas are regarded as particularly exposed.

More evidence that emerging currencies were having a bad day came from Russia, where the ruble dived again on Friday and is now down five percent since the US on Wednesday hit Russia with new sanctions over its alleged involvement in a nerve agent attack in Britain.

Stock markets across the world retreated as investors watched Turkey with growing unease.

Key European equity markets shed up to two percent, while Wall Street was down 0.7 percent after the opening bell in New York.