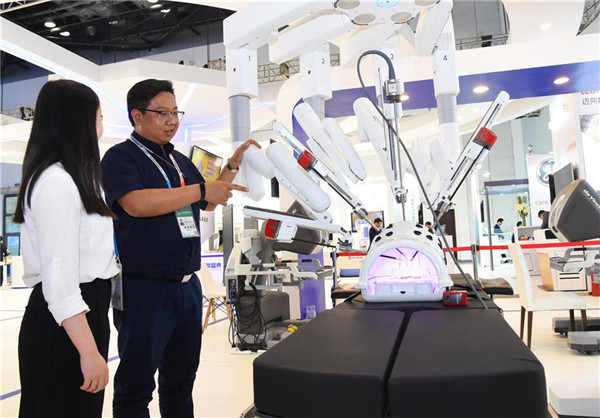 An exhibitor introduces a surgical robot during the 2019 China International Fair for Trade in Services (CIFTIS) in Beijing, capital of China, May 31, 2019. (Xinhua/Ren Chao)

A trade fair in Beijing has shown that China is making a steady steering on growth in knowledge and technology-intensive services.

The five-day 2019 China International Fair for Trade in Services (CIFTIS) drew the curtain on Saturday in Beijing, with intended contracts worth 105 billion U.S. dollars signed.

Over the week, the world's largest services trade fair hosted some 240 forums and business talks, which occupied nearly all major conference venues in the Chinese capital.

Yan Ligang, the fair's spokesperson, said 11 venues saw more than 400,000 visits by participants from 137 countries and regions and 21 international organizations.

As the non-manufacturing sector sustains an ever-expanding growth, the Chinese government, from this year, upgraded the biennial fair formerly held by the municipal government of Beijing since 2012 to a national fair for trade in services, which will be held annually ever since.

Many foreign visitors described CIFTIS as crucial for addressing the challenges facing the world economy.

"As national barriers to trade in services are mounting in numbers, CIFTIS gathers us together to discuss this issue in a timely manner and jointly explore the path to promote trade in service and create a favorable trading environment," said Ludger Schuknecht, deputy secretary-general of the Organization for Economic Cooperation and Development, in his speech delivered at the fair.

"At these difficult times in global trade, keeping the door open is a contribution that China can do to boost confidence in international trade and stabilize global demand," said Dorothy Tembo, deputy executive director of the International Trade Center (ITC), at CIFTIS.

She said as a joint agency of the United Nations and the World Trade Organization, ITC is dedicated to supporting SMEs around the world. It supported 100 companies from developing countries to attend the first China International Import Expo (CIIE) in Shanghai last year. These companies initiated deals worth over 116 million U.S. dollars after the event.

At a forum discussion at CIFTIS, Tembo said a WTO study finds that by lowering costs and increasing productivity, digital technologies could provide an additional boost to trade by up to 34 percent by 2030. China is by all means a global champion in retail e-commerce.

At an e-commerce themed exhibition area of CIFTIS, visitors were welcomed at the doorway by an exhibition of a smart home with intelligent furnishing presented by Gome Intelligent Technology Co. Ltd., the tech arm of Chinese home appliance retailer GOME.

From door locks and lighting to home appliances, everything is voice-controlled and connected to the Internet for remote control via a mobile app.

Nearby, the booth held by China's online retail firm of JD exhibited the fully automated "whole in- and ex-warehouse process" of small and medium-sized packages.

Even pictures on walls at the fair give a touch of new tech. Beside photos illustrated as China's poverty-stricken areas, visitors paused to scan QR codes underneath to find not only details but also local specialties that could be immediately ordered online, such as tea and pear syrup, as the e-commerce sales of farm produce is a part of China's poverty relief efforts.

The fair's organizer held an auction of the agricultural goods and futures orders of the goods, which garnered 1.4 billion yuan (202.8 million U.S. dollars) of fund for assisting the growers' poverty relief endeavors.

Worawit Techasupakura, a tourist official from Thailand, said a cohort of enterprises from Thailand's competitive industries including food, medical services and environmental protection participated in this session of CIFTIS.

China has worked to steer away from the old growth driver of export-oriented manufacturing to power the new engine of trade in services.

The Ministry of Commerce released at the opening of CIFTIS on Tuesday that China's service trade rose 2.6 percent to 1.29 trillion yuan (about 191 billion U.S. dollars) in the first quarter of 2019, after making a robust growth of 11.5 percent to 5.24 trillion yuan in 2018, a historic high and ranking second in the world for five consecutive years. The share of service trade in the country's total foreign trade has reached 15.6 percent.

In 2018, China's service export in transport, insurance, intellectual property royalties and other business service sectors all posted double-digit growth, with the export of computer and information soaring 69.5 percent year on year.

China has taken a slew of measures to open up the service sector and push forward services trade with overseas partners. Its service trade with countries and regions along the Belt and Road (B&R) reached over 120 billion U.S. dollars last year, according to the ministry.

Beijing is China's pilot city for the expansion and opening-up of the service trade industry. In 2017, it saw the launch of China's first foreign-controlled joint venture in aircraft maintenance, set up by Air France Industries KLM Engineering and Maintenance and Beijing General Aviation Co. Ltd.

In 2018, the added value of Beijing's service trade accounted for 81 percent of the city's GDP.

In March, the Bank of Beijing announced plans to join hands with global finance company ING Bank N.V. to invest 3 billion yuan in setting up a banking joint venture, in which ING Bank holds a 51 percent stake. 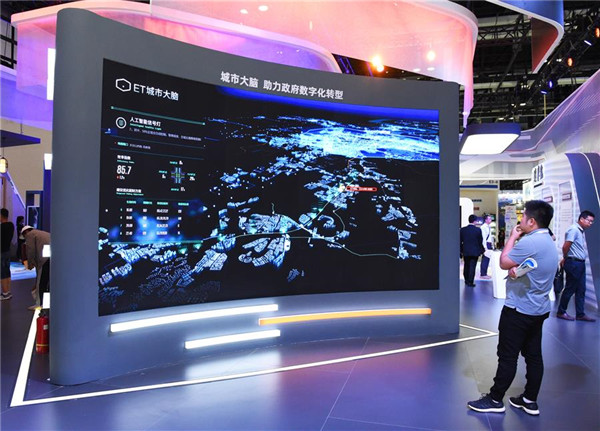 A visitor views an electronic screen for digital urban management during the 2019 China International Fair for Trade in Services (CIFTIS) in Beijing, capital of China, May 31, 2019. (Xinhua/Ren Chao) 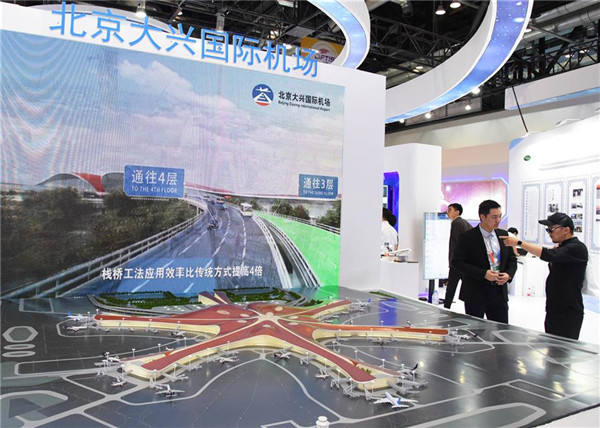 A visitor views the model of Beijing Daxing International Airport during the 2019 China International Fair for Trade in Services (CIFTIS) in Beijing, capital of China, May 31, 2019. (Xinhua/Ren Chao) 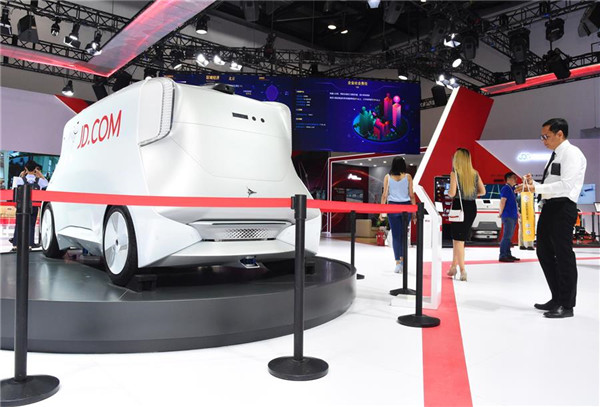 An auto-pilot freight vehicle is displayed during the 2019 China International Fair for Trade in Services (CIFTIS) in Beijing, capital of China, May 31, 2019. (Xinhua/Ren Chao) 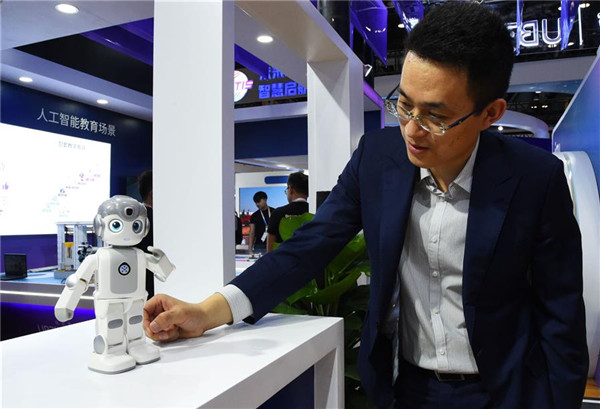 A man interacts with a portable smart robot during the 2019 China International Fair for Trade in Services (CIFTIS) in Beijing, capital of China, May 28, 2019. (Xinhua/Ren Chao) 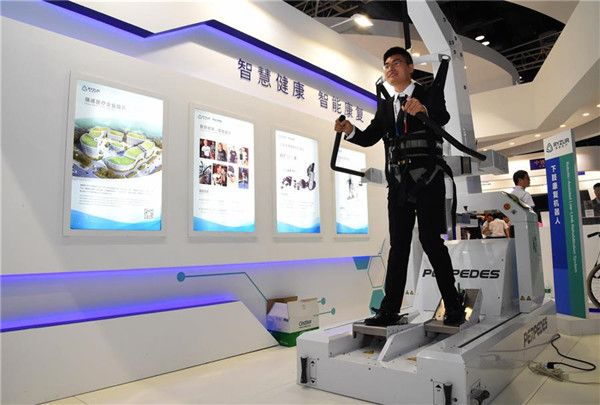 A man tries a leg-rehabilitation robot during the 2019 China International Fair for Trade in Services (CIFTIS) in Beijing, capital of China, May 28, 2019. (Xinhua/Ren Chao) 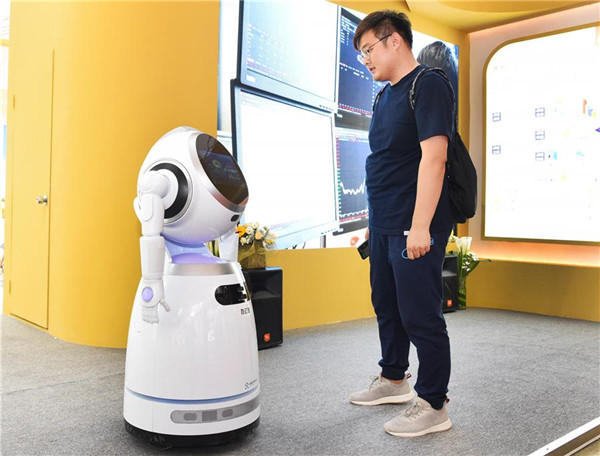 A visitor interacts with a robot during the 2019 China International Fair for Trade in Services (CIFTIS) in Beijing, capital of China, May 29, 2019. (Xinhua/Ren Chao)