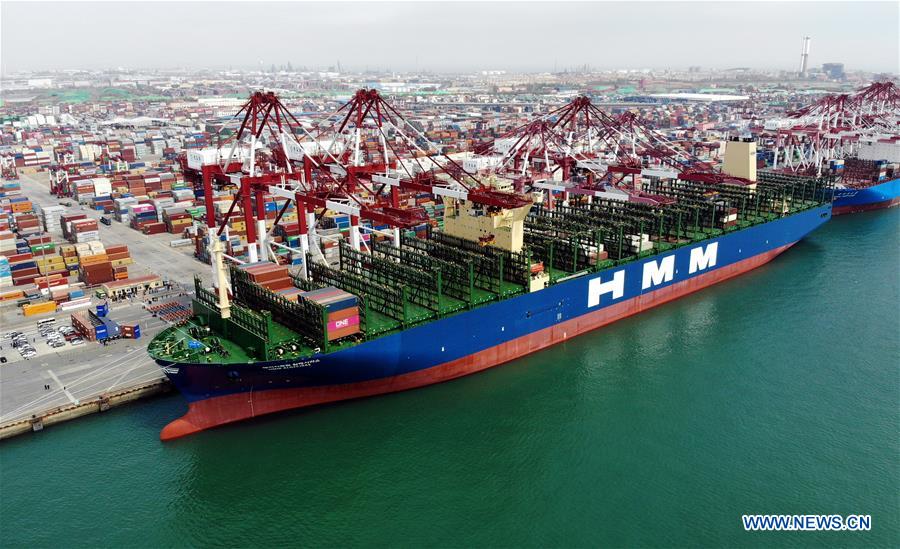 HMM Algeciras, the largest container vessel on earth with a TEU (20-foot equivalent unit) capacity of 24,000, started its maiden voyage from the port of Qingdao in eastern China's Shandong province on Sunday.

The ship, measures 399.9 meters long and 61.03 meters in beam and has a deck area of more than 24,000 square meters, about the size of three and a half standard soccer fields, said Zhang Jun, deputy general manager of the Qingdao Qianwan United Container Terminal Co., Ltd.

The HMM Algeciras can carry some 200 more containers than the previous largest container ship, Zhang added. When fully loaded, all 24,000 containers, if connected end to end, will reach a total length of 150 kilometers.

Recently launched in the Republic of Korea, the unloaded HMM Algeciras arrived at Qingdao port in the early morning on Sunday and sailed for Busan on Sunday afternoon with 4,560 TEUs of chemical, mechanical and electrical and non-staple food products.

"We are confident in China's economy, the cargo throughput capacity of the Qingdao port, as well as its quality service and efficiency," said Lee Joo Myung, chairman of Hyundai Merchant Marine (China) Co., Ltd.