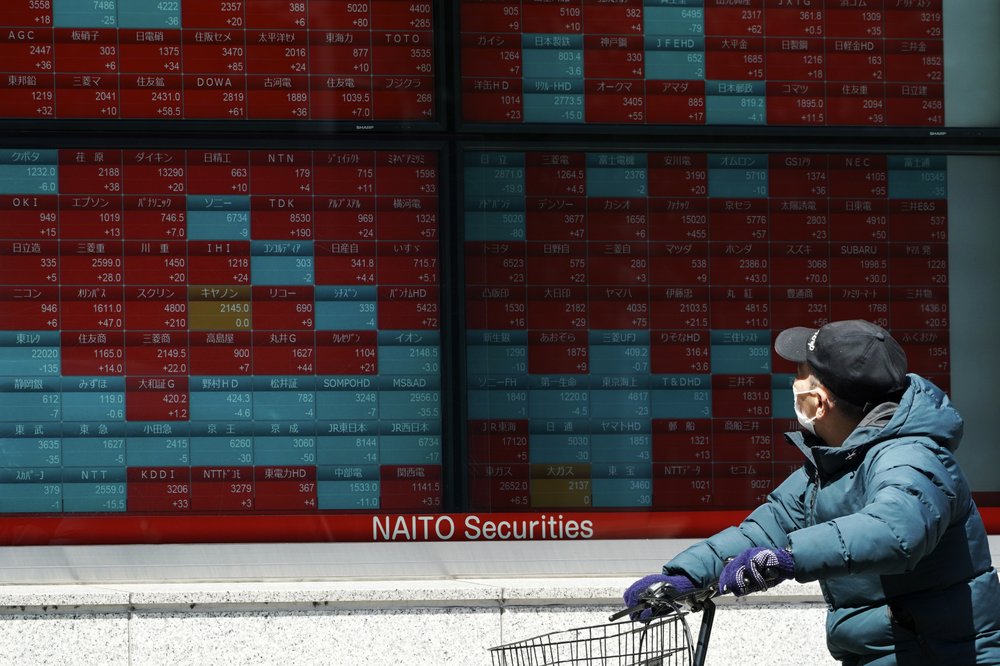 A man wearing a mask against the spread of the new coronavirus looks at an electronic stock board showing Japan's Nikkei 225 index at a securities firm in Tokyo Thursday, April 23, 2020. (Photo: AP)

Shares were mixed in Europe and Asia on Thursday following a rally on Wall Street and a slight recovery in oil prices.

The U.S. House was expected to vote Thursday on a $483 billion proposal to deliver more loans to small businesses and aid to hospitals after the Senate approved it on Tuesday.

The new bill would come on top of more than $2 trillion in aid that Congress has already approved. That, plus massive support for markets from the Federal Reserve, has helped the S&P 500 rise 25% since a low in late March. The index has roughly halved its loss from its record set in February.

Investors are still bracing for a severe, painfully deep recession after businesses shut down worldwide in hopes of slowing the spread of the coronavirus. Even as depressing economic and health reports pile up, some investors are looking ahead to parts of the economy reopening as infections level off in some areas.

Prakash Sakpal and Nicholas Mapa, economists at ING, said a rise in oil prices, which have been crashing, was a help.

“But rising Covid-19 cases in the region will likely cap any rally,” they said in a commentary.

Benchmark crude added $1.03 to $14.81 a barrel in electronic trading on the New York Mercantile Exchange. The price of a barrel of U.S. oil to be delivered in June jumped 19% to settle at $13.78 on Wednesday.

It had zigzagged in the morning before turning higher after President Donald Trump threatened the destruction of any Iranian gunboats that harass U.S. Navy ships, raising the possibility of a disruption to oil supplies.

The big gain, though, means it’s recovered just a fraction of its steep losses. It was close to $30 at the start of last week and nearly $60 at the beginning of the year. A collapse in demand for energy combined with continued production in countries around the world means too much oil is sloshing around, depressing its price.