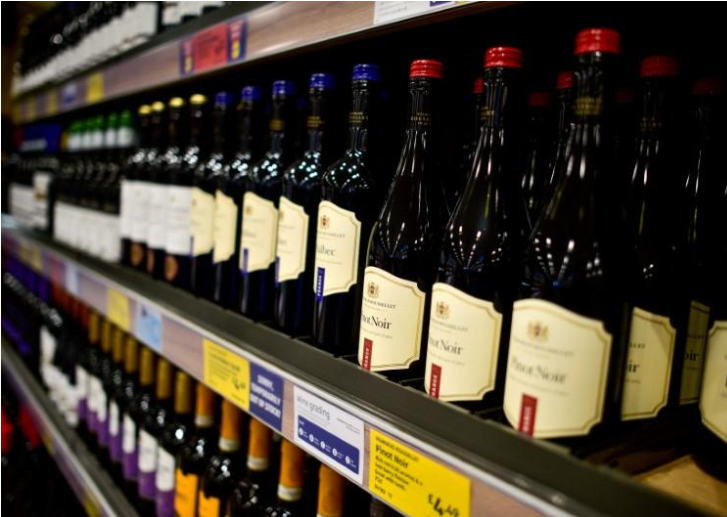 Bottles of wine displayed on a shelf in an Aldi store in London, Britain, February 15, 2018 (Photo: Reuters)

Global wine output fell to its lowest level in 60 years in 2017 due to poor weather conditions in the European Union that slashed production in the bloc, international wine organisation OIV said.

It is the lowest level since 1957, when it had fallen to 173.8 million hectoliters, the OIV told Reuters.

A hectoliter represents 100 liters, or the equivalent of just over 133 standard 75 cl wine bottles.

All top wine producers in the EU have been hit by harsh weather last year, which lead to an overall fall in the bloc of 14.6 percent to 141 million hectoliters.

The French government said last year production had hit a record low due to a series of poor weather conditions including spring frosts, drought and storms that affected most of the main growing regions including Bordeaux and Champagne.

In contrast, production remained nearly stable in the United States, the world’s fourth largest producer, and China, which has become the world’s seventh largest wine producer behind Australia and Argentina.

Trends were mixed in Latin America, with a rise of 25 percent in Argentina after a very low production in 2016 and a decline of 6 percent in Chile.

Chinese wine consumption rose significantly for a third year in a row with an increase in 2017 of 3.5 percent at 17.9 million hectoliters.

On the export market, Spain remains the largest exporting country by volume with a global market share of 20.5 percent, while France keeps its leading position in value with 9.0 billion euros ($11 billion) of wine exported last year.