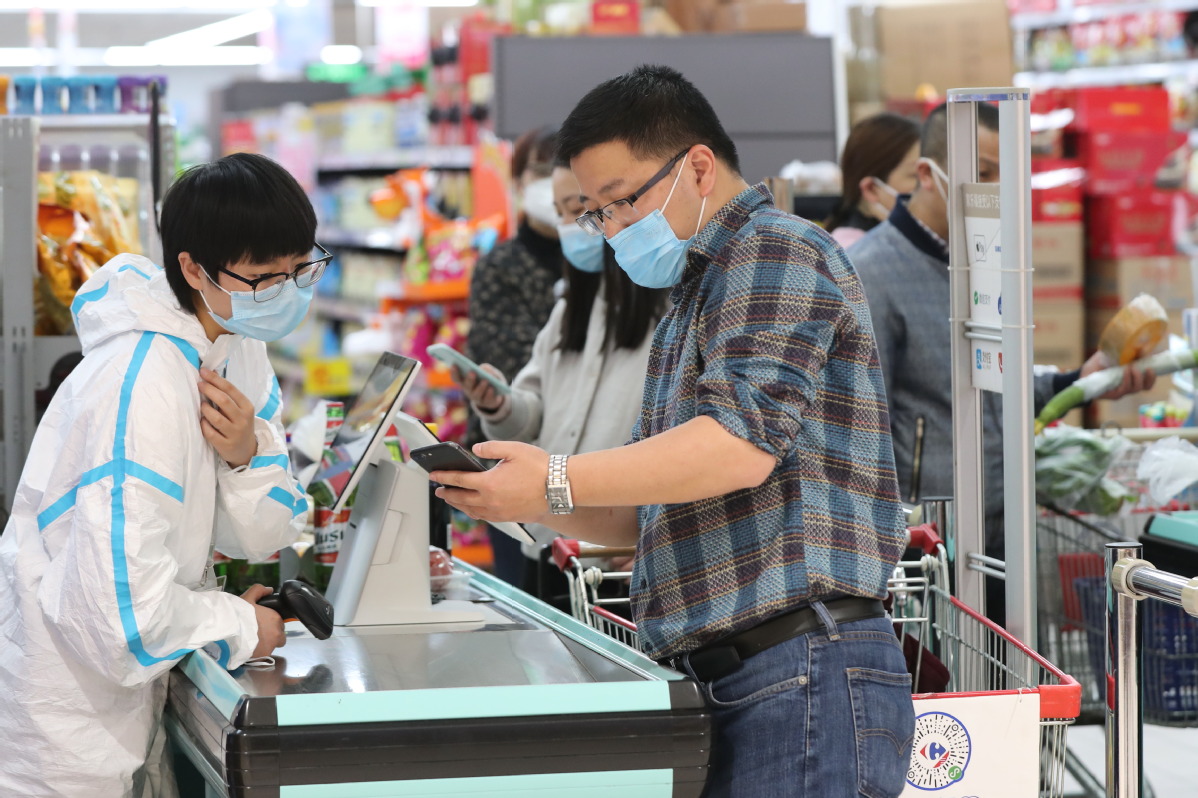 Residents check out with government-issued vouchers at a supermarket in Wuhan, Central China's Hubei province, on April 20, 2020. (Photo: China Daily)

The main shopping areas in Wuhan, Hubei province, continued to enforce strict epidemic control measures over the weekend as the number of shoppers increased after the city government started to distribute discount coupons to stimulate consumption.

At noon on Sunday, the Wuhan government distributed 30 million yuan ($4.23 million) in consumption coupons that can be used in shops, supermarkets, restaurants and tourist and cultural sites citywide via major digital platforms, including Alipay and WeChat.

Eventually, the city government will distribute 500 million yuan in such coupons to revive the local economy hit hard by the novel coronavirus outbreak. About 18 million yuan of the vouchers have been designated for the registered low-income people in the city.

People were only allowed to choose one type of coupon to receive discounts ranging from 10 to 80 yuan depending on the amount that they spend. Coupons for supermarkets are the most popular. They were all gone within 45 seconds since they became available on Alipay, the company said.

Statistics from Alipay show that more than 40 cities across the country have issued coupons since March 13 to encourage people spend more. The move has already leveraged consumption worth over 10 billion yuan.

Distributing coupons can better stimulate consumption in China than directly giving people money, as has been done in some countries, like the United States, said Huang Manyu, professor of the economy and trade department of Zhongnan University of Economics and Law.

"Chinese people have the habit of saving, so they may save the money without spending it. Then it won't help to achieve the goal of stimulating consumption," Huang said.

People in Wuhan can redeem the first set of coupons from Monday to April 29. From April 30, the coupons will be distributed weekly. Visitors to the city are also eligible to collect the coupons.

"It's a sign that the city is recovering at a faster pace. Also, people are confident enough to come to the crowded shopping areas because of the strict epidemic control measures in public areas," said Liu Qiqi, a high school teacher who came to Han Street, a popular shopping area in central Wuhan, on Sunday.

The shopping area was among the first group of shopping malls and areas in Wuhan to open to shoppers on March 30 after strict epidemic control measures were put in place. All commercial areas in Wuhan were closed after the city, which was the hardest hit by the outbreak in China, was put under lockdown on Jan 23.

People are required to present their "green code", an indication they are symptom-free, on a health code app on their phones and have their temperature checked at the entrance of the shopping area.

Liu, 28, came to find out which shops accept the government issued vouchers. She was pleased to see that her favorite sportswear store was among them.

"I didn't expect to see this amount of people today, but there were still far fewer people compared to what it was like before the outbreak during weekends," Liu said.

On Sunday afternoon, people had to line up in front of some Han Street shops that decided to limit the number of shoppers inside as a part of the epidemic control measures. Some shops also have been displaying epidemic control items such as masks and hand disinfectant near their entrances to attract customers. Meanwhile, majority of the restaurants in the shopping area still only offer take-out and delivery services.