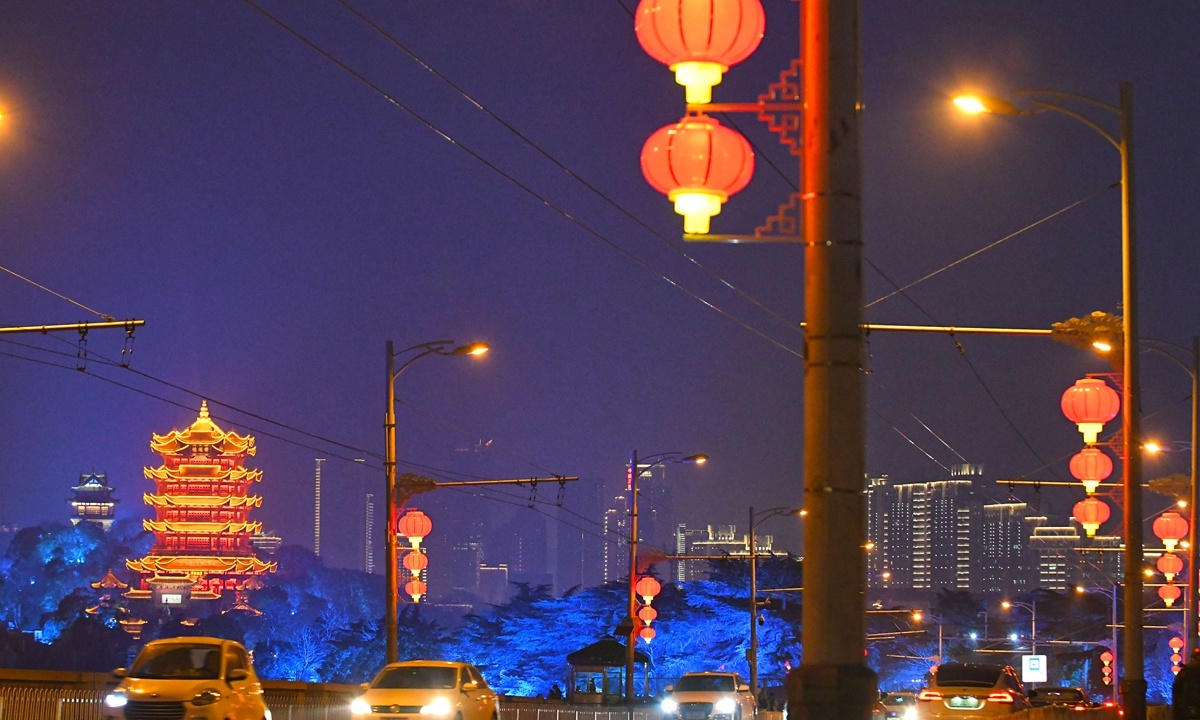 On January 20, the streets of Wuhan, Central China's Hubei Province were decorated with 30,000 red lanterns for the upcoming Spring Festival holiday. Photo: VCG

Wuhan, the city hit hardest by COVID-19 in China, announced on Friday better-than-expected economic performance in 2020, with GDP declining to only 4.7 percent on a yearly basis to 1.56 trillion yuan ($241.9 billion), a huge lift from the negative 40.5 percent growth in the first quarter of last year, retaining the city's place in the country's economic tier of top 10 cities.

As the city that experienced the longest lockdown and suffered the most in China at the hands of the epidemic, Wuhan, the capital of Central China's Hubei Province, saw its GDP fall precipitously in the first quarter, flatten in the second quarter, then sprint to full recovery starting the third quarter.

The whole year of 2020 was better than expected, and Wuhan's economic aggregate ranks among the top 10 cities in the country, according to Wuhan's government work report on Friday.

Wuhan's economic output of 1.56 trillion yuan in 2020 was nearly equivalent to that of Romania. 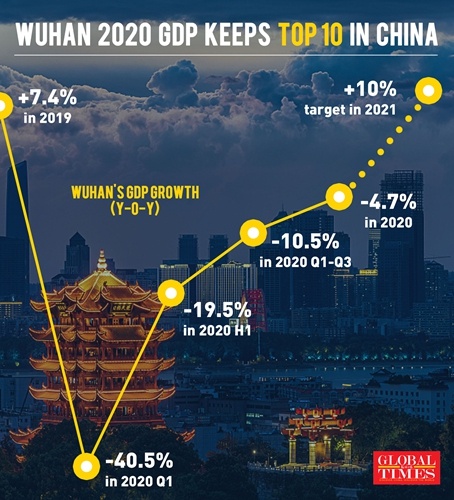 Despite tremendous hardships in recovering its industries and enhancing the consumption power of local people that have been hit severely by the virus, the city has already returned to its vigor and is striving to catch up in the year to come.

Dong Dengxin, director of the Financial Securities Institute at Wuhan University of Science and Technology, told the Global Times that "compared with the plunge in the first quarter, when the virus grounded all economic activity to a halt, the city's robust recovery in the second half is unimaginable and stunning."

In 2020, Wuhan embraced an increase of 1,842 high-tech enterprises, up 41.7 percent compared with 2019. The actual funds in place from outside investment reached 932.86 billion yuan, an increase of 6.7 percent year-on-year. The city yielded a 10.8 percent increase in its foreign trade against the virus headwinds.

Amid strong recovery momentum, Wuhan has set its GDP growth goal of 10 percent for 2021, aiming for fixed-asset investments to go up 10 percent, retail up 15 percent and urban unemployment rate controlled within 6 percent.

Tian Yun, vice director of the Beijing Economic Operation Association, said that looking back at Wuhan's resolute and timely lockdown a year ago, it was such a swift reaction to the emergency. With effective virus prevention measures in place, it accelerated the pace to put work resumption on the agenda.

"In this sense, Wuhan serves as a model for both domestic and foreign cities to follow," Tian noted.

Wuhan's economic output, which accounted for around 37 percent of the province's total, performed better than the province as a whole: a 5 percent decline year-on-year.

Official data released last week showed Hubei's GDP contracted by 5 percent last year to 4.34 trillion yuan, beating economists' expectations of a double-digit decline. It is the only province that recorded a negative year-on-year GDP growth in the Chinese mainland.