BUSINESS Xinjiang manufacturer rush socks to the US amid tariff threats

Xinjiang manufacturer rush socks to the US amid tariff threats 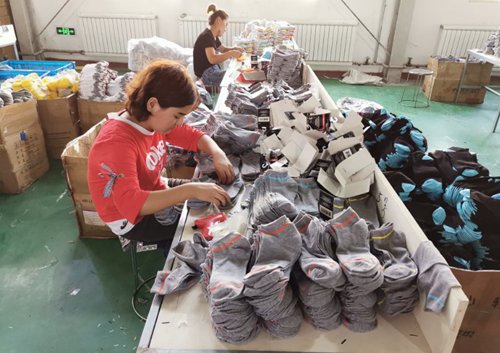 On Sunday afternoon at a textile industrial park in Aksu, Northwest China's Xinjiang Uyghur Autonomous Region, factories were closed for their one-day weekend, yet a few remain open. Among them is Aksu Hengchang Textile Ltd. Inside one of the company's workshops, six employees were packaging newly made socks. "We are trying to rush this to the US, before the new tariffs," Hou Jianfu, owner of Hengchang, told the Global Times on Sunday, "If we cannot make it and get hit by a 25 percent tariff, then we make nothing."As the US government threatens to slap a 25 percent tariff on all Chinese products exported to the US, Hou's products could also be targeted. Though US officials have not given a specific timeline for the new tariffs, US President Donald Trump has said that if Chinese President Xi Jinping does not agree to meet him on the sidelines of the G20 Summit in Japan later this month, the US will impose tariffs on $325 billion worth of Chinese goods.Cutting orders In light of the escalating tension between China and the US over trade and technology, Hou said that although there has yet to be an impact on previous orders from the US, his company has already slashed orders from US companies with delivery dates after August by two-thirds due to tariff uncertainties."If we don't make any money from this, then there is no point. We will not take money out of our pockets to make socks for free for the Americans," Hou said with a smile, adding that if the tariffs happen, then he will renegotiate with US companies and demand higher prices. "The feedback from our US partners is that they will shift the tariffs to the consumers. But I don't know how that will work," he said.Hou's company is not the only one in the industrial park that has been hit by US tariffs. Other companies, which make clothes for US brands such as Disney, have also seen a decline in orders, according to Wang Yongfeng, deputy head of the industrial park's management committee."Many companies here have been impacted. Some have seen their orders drop dramatically," Wang told the Global Times on Sunday, adding that many companies are waiting to see what will happen with the trade war.Shift production Aksu has become an increasingly popular alternative for many textile companies among traditional manufacturing hubs on China's East Coast, where production costs, labor, and energy, have risen sharply in recent years, prompting many to shift production, with some even moving their factories out of Southeast Asia.Outside of reduced labor costs, Aksu offers a wide range of policy support to companies, including subsidies and construction for new factories, transportation and electricity costs, according to Wang.Aksu, located on the border with Kazakhstan and Kyrgyzstan, is also an ideal location for companies eyeing Central Asian markets and beyond. "We are aiming to build the largest textile production base that covers not only Southern Xinjiang but all neighboring countries," Wang said.It is with these benefits and potential, Hou moved part of his company's production from his hometown of East China's Zhejiang Province to Aksu. "We came here because we want to explore more markets in the neighboring countries, but so far it has been slow because demand there is not nearly comparable to that in the US market," he said.After finishing the socks in Aksu, Hengchang transports them to Shanghai, where they will be then shipped to the US. "So far, everything has been running smoothly," Hou said.In total, the Aksu industrial park, which is still under construction, has attracted 100 companies and employees over 40,000, mostly local ethnic minorities. Once completed, the industrial park could be a regional hub for textile products to reach countries in Central and South Asia and Europe via transport links established under the Belt and Road Initiative (BRI) and employ more than 100,000, according to Wang.Though some companies, like Hengchang, focus on European and US markets, many are eyeing other emerging markets in Asia and Africa."We came here to supply the military, but now we are also looking for overseas markets," Chen Tao, general manager of Xinjiang Yiling Knitting Company, told the Global Times on Sunday.The company is part of the country's military-civilian integrated development program. "Our goal is to supply one-third of our products to the military, one-third to the civilians and the rest for export," Chen told the Global Times.