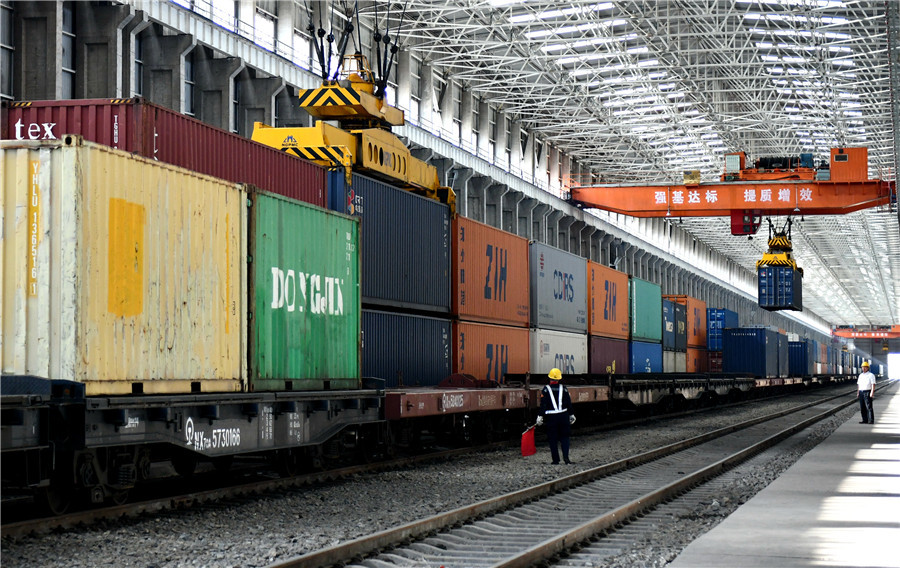 Containers from a train that originated in Poland are loaded onto a train bound for Chongqing, Southwest China, at an indoor transfer station at the Alataw Pass, Xinjiang Uygur autonomous region. (Photo: China News Service)

URUMQI -- The number of China-Europe freight trains handled by the customs of Alataw Pass, a major rail port in Northwest China's Xinjiang Uygur autonomous region, has exceeded 2,000 so far this year, the customs said Tuesday.

Alataw Pass has seen its cargo rail service grow steadily since the first international freight train via the port was launched in 2011. The port has handled 13,540 inbound and outbound China-Europe cargo trains as of Tuesday.

With the continuous expansion of the China-Europe freight rail services, the trains now transport a greater variety of goods including more than 200 categories of items, from electronic products, mechanical products to daily necessities and food, according to the customs.

The customs said they have implemented measures such as optimizing and simplifying the customs clearance process to boost efficiency.

Since this year's Spring Festival, the number of China-Europe freight trains through Alataw Pass has picked up significantly to reach up to 16 trains per day, according to the customs.