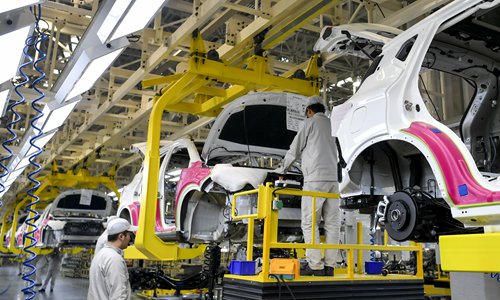 After two hours of hectic work in the morning, Guzalnur Samat adeptly switches off the machine by the assembly line and quickly walks into the Moslem canteen."I am learning new techniques every day, and the job is perfect for me," said Guzalnur, a 27-year-old blue collar worker who has worked for four years at SAIC Volkswagen's factory in Urumqi, capital of Northwest China's Xinjiang Uyghur Autonomous Region.She is one of 700 factory employees. Opened in 2013, the factory was the first passenger vehicle production base to be established in Xinjiang."If it weren't for this job, I would have gone back to my small hometown to teach Putonghua to ethnic minority groups, which would not have been half bad," she said. "But I would still have yearned for an opportunity like this."Guzalnur, who is of the Uyghur ethnic group, said her income was much more competitive than the average pay in her hometown of Janbulak, a scenic spot known for the spectacular sight of wheat fields. And she recently bought a house in the city of Urumqi, with plans to settle down there."I also met the love of my life at the factory," Guzalnur said. "Everything now is on the right track."Auto industry taking shape"We came to Xinjiang to nurture and break into a booming market," said Fu Xuejun, director of SAIC Volkswagen's Xinjiang factory.The annual output of the factory has now reached 20,000 vehicles. The vehicles manufactured here are either sold locally or shipped to other provinces and regions in West China.Despite favorable government policies on taxes and land procurement, building a vehicle factory in China's westernmost region was not without difficulties and challenges."The lack of supporting industries was our biggest challenge here," Fu said. "Long-distance transportation of machinery parts from the Yangtze River Delta inevitably eats up a large part of our profit margin."The factory saw its first car come off the assembly line in 2013, when China put forward the Belt and Road (B&R) initiative for international cooperation and co-development. The proximity to countries along the Silk Road Economic Belt has brought Xinjiang a broader vision."We saw a new path through the initiative," Fu said. "This factory in Xinjiang will be our westward bridge on the Silk Road."The factory's export permit to Russia, Pakistan, Afghanistan and the five Central Asian countries -Kazakhstan, Uzbekistan, Kyrgyzstan, Tajikistan and Turkmenistan - is expected to be issued later this year.Fu said the new market would likely boost the factory's manufacturing capacity. To further adapt to the new customer base, the factory has decided to put forward a new model of SUV next year.Last year, another passenger vehicle company GAC Motors opened a factory in Urumqi, also hoping to tap into the growing market."The magnifying effect of the prospective demand along the Belt and Road [routes] is growing," said Liu Dianbin, senior technology manager of SAIC Volkswagen's Xinjiang factory. "It is only a matter of time before a fully-fledged vehicle industry takes shape in Xinjiang."Liu Dianbin said he and other senior staff could have been transferred to the Shanghai headquarters after three years, but none of them intended to go back. "We know we are building something big here," he said.Regional center for industriesXinjiang's position as China's key passageway to Central and West Asia has been emphasized during the five years since the B&R initiative was proposed.The region is one of the three outlets for China-Europe freight trains, which just reached 10,000 since the first was launched in 2011. Up to 3,600 tons of cargo are handled every day in Urumqi, now one of the largest logistics hubs along the Silk Road Economic Belt.But Xinjiang is posed to be more than just a doorway to the West. Benefiting from its geographical location, the once remote border region is shaping into a regional center of industries."Some of the countries along the B&R routes still lack the infrastructure for electricity, industry and transportation," said Liu Qianjin, chief technology officer of ABB (China), whose business fields range from electrical equipment to automation technology. "We therefore highly value our company's development in and around Xinjiang, the core region of the Silk Road Economic Belt."Liu said the company established its first service center in Xinjiang in 2015, looking for more partnerships with Chinese enterprises on overseas ventures."The five Central Asian countries are the largest market for Xinjiang's clothing industry," said Zhang Xi'an, vice chairman of the Chinese Chamber of Commerce for Imports and Exports of Textiles and Apparel.In 2017, China's clothing exports to the five Central Asian countries reached $7.2 billion, and Xinjiang alone accounted for 80 percent of the total value. Among the countries and regions along the B&R routes, Eastern Europe is the second largest market for Xinjiang's clothing industry.From 2014 to June this year, the number of clothing enterprises in Xinjiang increased by 2,200 with more than 540,000 people employed in the industry. Many clothing companies from East China have chosen Xinjiang as their new base."Xinjiang and the Central Asian countries are complementary in the clothing business," Zhang said. "We are looking at giant potential for industry development and commerce cooperation."