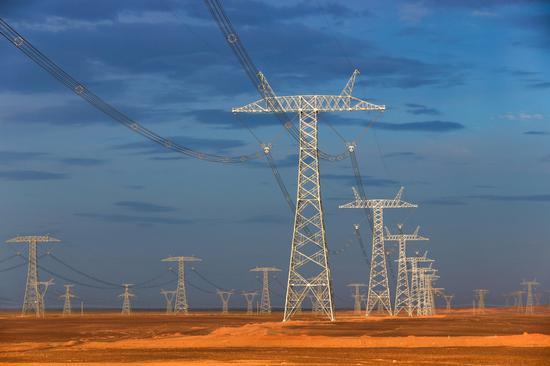 A view of the transmission line project in the Xinjiang Uygur autonomous region. (Photo by Liu Wenlong/for chinadaily.com.cn)

Northwest China's Xinjiang Uygur autonomous region has transmitted more than 100 billion kwh of electricity to other parts of the country since the beginning of this year, local authorities said.

The transmission volume hit 100.01 billion kWh at 6 p.m. Wednesday, surpassing the 100 billion kwh mark during a one-year period for the first time, according to the State Grid Xinjiang Electric Power Co., Ltd.

A major ultra-high voltage link between Xinjiang and east China's Anhui Province was upgraded in July to increase Xinjiang's total transmission capacity to 16.4 million kilowatts, according to the State Grid's Xinjiang branch.

While coping with the impact of the COVID-19 pandemic earlier this year, the State Grid's Xinjiang branch used drones, robots and other technologies for the maintenance of convertor stations and transmission lines to ensure the smooth operation of the power transmission project.