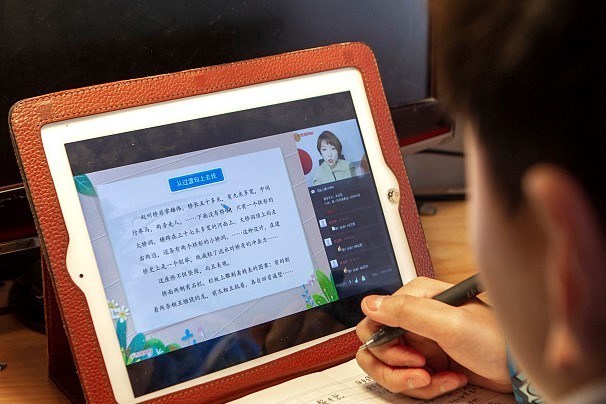 Stable careers, fat pay lure talent to sector whose 2020 sales revenue is seen at 486b yuan

While most of his classmates from Harvard University's John F. Kennedy School of Government threw themselves into Wall Street, Frank Wu Jundong, a Chinese graduate in public policy, decided to become an online teacher back in China.

It was a decision which surprised his friends.

"It is widely divergent from the common choices of flowing into offline schools years ago, as the online education companies can offer teachers a generous return in salary, social reputation and a sense of accomplishment," said Wu, who is now an English teacher at Xueersi Online School, the online subsidiary of education giant TAL Education group.

"It is here in the country that I could step further to explore how technology will change the education sector and how an individual teacher can influence thousands, even millions of students, in front of the screen rather than a classroom," Wu said.

Wu was among a rising number of young graduates with higher education records－including top 10 universities worldwide and leading ones in China like Tsinghua University and Peking University－who jumped on the bandwagon of the booming online education sector.

Behind the trend is a huge, and still flourishing, online education sector in China. It offers graduates a high salary and a potential for more growth.

Several years ago, Chinese online education was still in its infancy where everything about the market was unknown. But now, the sector has become orderly, standardized and has its own unique market potential.

According to consultancy iiMedia Research, the total sales revenue of China's online education sector is expected to hit 485.8 billion yuan ($71.8 billion) this year, a sharp increase from 387 billion yuan last year. The total user amount will hit 351 million by year-end.

"The nation's online education market is becoming more mature by being more standardized and having a higher industry entry barrier. Almost all leading companies are leveraging advanced technologies including artificial intelligence to promote the industry's development," said Wu Liang, deputy director of the Information Center at the Beijing Academy of Educational Sciences.

Hao Yuefei, head of large-scale online classes at Xueersi Online School, said the entry barrier to become an online education teacher has become a systemic and scientific training system in TAL, which is quite strict to many freshman teachers.

"After passing the interview, this year's freshman teachers will go through a one-month full-time training and one-on-one grinding lessons for three to six months. These trainings are to ensure that these teachers have strong enough learning ability and whether they can continuously break through themselves in the teaching process," said Hao.

A timetable from Xueersi showed that all the teachers will go through test questions, two rounds of collective lesson preparation, three rounds of discussion, a first version trial, head teacher feedback, personal head lessons, second version trial lectures, feedback from the head teachers again, and the collective review of lessons.

While the arrangement is saturated from 9:30 am to 10:00 pm, Hao noted that online teaching requires much more input than offline, since companies must try their best to make sure that the learning effect won't be reduced online.

Five minutes before the start of a mandarin class at Xueersi Online School, a teacher named Qiangqiang joined the students attending the class so they can familiarize themselves with the classroom's rules, and quickly preview the main content of the course to them.

Then the course was cut to the main lecture part on the screen where the lecturer began the lesson.

TAL Education Group was among the first batch of online education companies that launched the business model combining the main lecturer and the head teacher, or a class tutor, where the two roles cooperate deeply in real teaching scenarios.

The main lecturer focuses on teaching while the head teacher is responsible for organizing and guiding students before and after the class.

"From the earlier recording and broadcasting class mode to the dual-teacher livestreaming class, and then to the introduction of self-developed AI technology into the class, we aim to offer more comprehensive and efficient online education solutions for global users," said Liu Qingxue, president of Xueersi Online School.

Xiong Bingqi, deputy director of the 21st Century Education Research Institute, said: "The biggest problem lies in how to solve the problem of individualization and interactivity. A class tutor can well solve the problem through using technical tools including big data analysis, AI recognition, and production-assisted tool development.