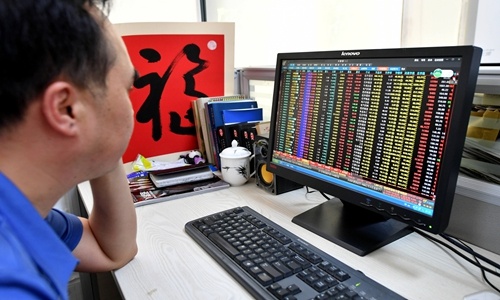 For 28-year-old Beijing-based white-collar worker Huang Qian, the most anxious and exciting moment of the day is around 9:00 pm, when the yields of her investments come out, one after another, on online platforms.

Huang has bought more than 10 public equity funds since last year, covering all major sectors in the capital market, such as new energy, blue-chip, pharmaceuticals and liquor. In recent days, she also allocated some of her savings to buy qualified domestic institutional investors (QDII) products, which are primarily invested in equities listed at the Hong Kong stock market, after the net southbound capital inflow into the Hong Kong stocks hit a record high of 270 billion yuan since the beginning of the year.

Despite the recent turbulence in the A-stock market, Huang's rate of return on investment to date has exceeded 30 percent, which is "way ahead of" that of fixed income products, Huang said.

Having worked for four years, Huang has allocated more than half of her savings into the capital market. In addition to the public equity funds, she has also purchased bonds to hedge against risks.

Huang still identifies herself as a "rookie investor" who does not hold a professional understanding of the A-share market, but by chance she had profited bigly from the market boom last year.

"I began to invest on my friends' suggestion in the middle of 2020. My criteria for investment are very simple: first is an industry that is on a fast growth track, second is an experienced fund manager," Huang told the Global Times on Thursday, noting that investing in public equity funds — which share the dividends of the stock market — save time, rather than directly pumping money into the A-share market.

"Working hard is of course important, as it provides you with a stable source of income. But how to amass your personal wealth and beat inflation is also important," Huang said. "For me, making money is so much fun."

Huang is just one of the millions of Chinese youngsters who have dived into China's rapidly-growing public investment funds. According to a report issued by Asset Management of Association of China, the volume of China's public equity funds reached 19.89 trillion yuan as of the end of December, up 34.7 percent year-on-year. And their profits totaled 1.98 trillion in 2020.

Among the new-comers to the investment market last year, more than half are from the post-90s generation, China's Central Television station reported in January.

Running into the market

"In the past, we focused on gossip such as celebrities' affairs when having a party, but now we discuss funds, new investment trends and 'star' fund managers. It is also a good ice-breaking topic when you get to know new friends," a 30-something Shenzhen-based employee in the new media industry, surnamed Zhu, told the Global Times on Thursday.

Whenever the funds rise or fall, Zhu and his friends share the happiness and gloom together, and such "emotional bonding" has drawn their friendships closer. Zhu described public equity funds as an efficient social networking tool.

One of the fund managers who Zhu and his friends respect as their "idols" is Zhang Kun, deputy general manager of research at public equity fund management company Efund's. Zhang is the first fund manager in China that has managed a fund surpassing 100 billion yuan.

On January 25, the net value of one of the funds Zhang Kun managed, Efund Blue-chip Selection, which invests heavily in liquor companies and Hong Kong-listed high-tech firms, soared by over 5 percent amid an across-the-board rally. That night, Zhang Kun and his blue-chip fund were featured in China's twitter-like Weibo's top searches, with some joking that Efund, as well as Romanee-Conti and Lafite Rothschild, are the world's most prestigious three chateaus.

Zhang's young fans also set up a Weibo account, Efund Zhang Kun global support club. The account has more than 15,000 followers as of Thursday. "As long as Kun stays young, the blue-chip will be long-lasting," one of their slogans reads.

On another Chinese social networking platform, Quora-like Q&A platform Zhihu, the followers of the topic "public equity funds" are rising to 2 million.

The young generation's enthusiasm for investments is partly fueled by a rapidly-growing domestic stock market that is becoming more mature and further aligning with the international level, industry analysts say.

The Shanghai composite index also has stayed above 3,500 points for the most part since the beginning of 2021 and had surged to a mark above 3,600 points in early January.

"As China's capital market opens up, it further attracts large torrents of overseas capital. The market is also reshaped in a way to make institutional investors have more of a price bargaining edge over retail investors," said Xu Gao, chief economist with Bank of China International, noting that investing in public equity funds is safer and more reliable for individual investors.

He explained that the younger generation, who have an interest in preserving and growing their wealth, also hope to secure extra financial dividends to make up for slower growth in salaries since 2020 because of the Covid19 pandemic.