ZTE eyes US reprieve, but trade tension unlikely to ease 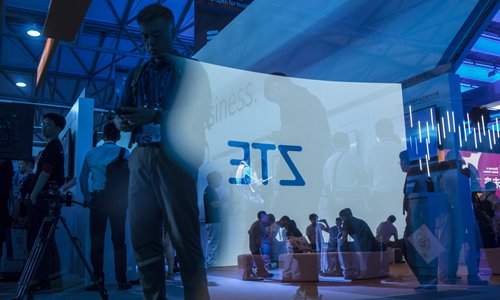 The ZTE logo is reflected on a pane of glass at the Mobile World Congress Shanghai on June 28. (Photo: VCG)

Chinese telecoms giant ZTE Corp said Thursday that it will hold an extraordinary general meeting on August 28, after the US announced it would lift its ban on the firm on some conditions.

But the US gesture will not ease the ongoing China-US trade tensions, analysts said.

Xiang Ligang, chief executive of telecom industry news site cctime.com, told the Global Times Thursday that the possible lifting of the ban does not mean the US is considering milder measures toward China.

Xiang said that ZTE, one of the world's largest telecom equipment makers, should adhere to its market-driven strategy and become more internationalized. "Strengthening its internal management will also be significant," he noted.

ZTE has been forced to suspend its main operations worldwide since the US Commerce Department prohibited US companies from having any dealings with it in mid-April after the US found it violated trade bans with Iran and North Korea. The move was potentially devastating for the Chinese enterprise as about 25 to 30 percent of its components are sourced from the US, according to media reports.

The US Commerce Department said in a statement on its Twitter account on Wednesday that the ban on ZTE will be removed once the company deposits $400 million in an escrow account.

"Once ZTE has completed the $400 million escrow deposit, BIS [the Bureau of Industry and Security] will issue a notice lifting the denial order. Until such a notice, the denial order remains in full force and effect," it said.

These penalties are in addition to the $892 million in penalties ZTE had already paid to the US government under the March 2017 settlement agreement, it noted. The new settlement also required ZTE to replace its entire senior management team.

The company said it would appoint Xu Ziyang to replace Zhao Xianming as ZTE's president, according to a Hong Kong stock exchange filing on July 5.

"The US trick is to torture you while keeping you alive," Xiang said, adding that the US does not want ZTE to collapse, as that would lead to counter-measures from China.

Regarding possible responses, Xiang gave the example of US firm Apple Inc. "If things go that far, we can require Apple to comply with our rules such as using the BeiDou Satellite Navigation System instead of its current system."

Fu Liang, an independent Chinese telecom industry expert based in Beijing, told the Global Times on Thursday that the US statement basically signals that ZTE can restart its operations and resume its business, which has been suspended for nearly three months.

Following the statement, shares in ZTE in Hong Kong surged as much as 28 percent during trading on Thursday, before closing up 25.13 percent from the previous trading day.

In the A-share market, ZTE's stock price rose by the daily limit of 10 percent at the opening of the Shenzhen Stock Exchange on Thursday.

"The Chinese telecom giant has finally pulled through," said Fu. But he conceded that ZTE has possibly been forced to pay a higher price amid the ongoing trade tension.