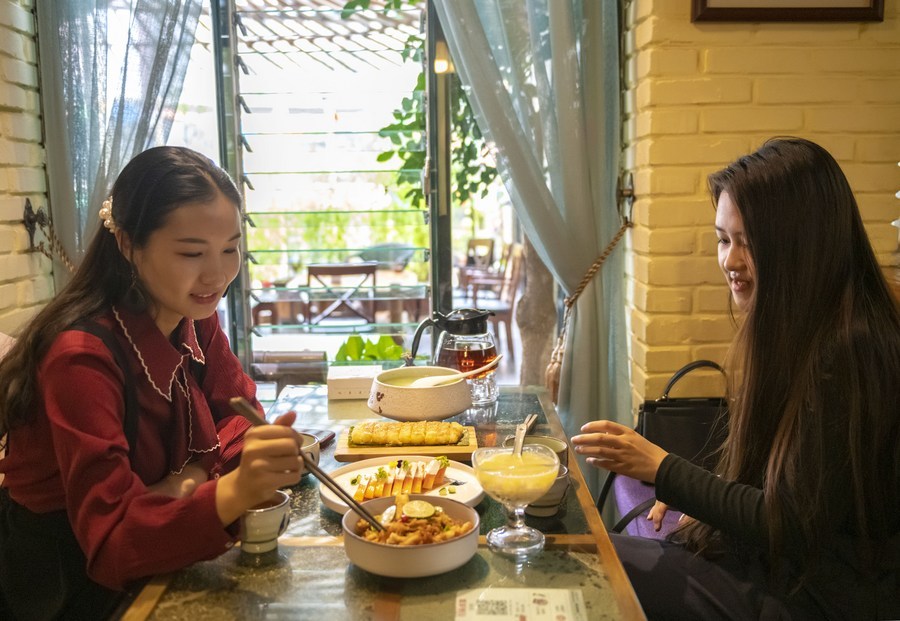 "Big stomach" mukbang (also known as eating broadcasts) was recently under fire among Chinese internet users for its encouragement of a serious waste of food.

The relevant newswent viral on Sina Weibo. Many netizens called for permanent ban on the videos of binge eating. According to a poll by Zhong Xin Cai Jing, a financial and economic media outlet, concerning opinions on "big stomach" mukbang among the 351,000 respondents, 53.8% of them said they could accept the idea of mukbang but not the waste of food.

A total of 34.2% of them wondered at the deeper social meaning of mukbang. "What a waste of food! Food deserves respect!" said a netizen nicknamed "Bobo tree."

Mukbang, or Meokbang, a mash-up of the South Korean words "meokneun" (eating) and "bangsong" (broadcast), is an online audiovisual streaming where a host shovels down a gigantic amount of food in front of a camera while interacting with the audience. Such eating shows originated in South Korea around 2010 and have since taken off globally.

Chongqing native Zhang Yumi, better known as Mi Zi Jun on the internet, is one of the most successful hosts of eating broadcasts in China with over 17 million followers on Weibo.

She was among the first Chinese people to live-stream themselves eating, and her single-meal records include four kilograms of rice, eight bowls of rice noodles and 80 steamed stuffed buns. Mini, also a Chinese Mukbang star, has once eaten 800 crayfish in one hour.

Despite a huge appetite, most of the eating broadcasters seem to stay slim and even get thinner, which is triggering some curiosity and doubt among the audience.

It's said that many mukbang participants will resort to "fake eating." The hosts take a bite of the food, chew and then spit it out without swallowing. When editing the video, they just cut out the spitting section out and pretend to have devoured everything.

Additionally, emetics are also popular among the hosts to help them avoid gaining weight, despite the potential for harm to the esophagus and erosion of the teeth.

Consuming a large quantity of food ostensibly is a terrible waste of food. One-third of all the food produced on Earth, totaling 1.3 billion tons, is lost or wasted every year. At least 820 million of the world's 7.633 billion people –one in nine – suffer from hunger in the world, according to the statistics from the Food and Agriculture Organization of the United Nations (FAO).

"I think this is a very bad and worrisome trend. Such squandering completely runs counter to our efforts to develop the social awareness of thrift and reducing food waste," said Cheng Shengkui, a researcher from the Chinese Academy of Sciences.

The health of the broadcasters may also collapse due to their indulgence in prolonged binge eating.

In June, this year, a "big stomach" live-streamer named Wang, living in Shenyang city, Liaoning province, suddenly suffered from numbness, dizziness and other symptoms just before he began his broadcast. After seven days in hospital, he died of brainstem hemorrhage.