In 2017, Chishui became the first county-level city in Guizhou Province to be removed from China's poverty list.

The locals planted bamboo and produce, using the local ecology to help raise their fortunes. The people set up cooperatives to help them sell the products they grew and made.

The 'Streaming down the Yangtze' team has visited one a village in Chishui where Shihu, a special herb used in Chinese medicine, has become the product-of-choice for villagers looking to raise themselves above the poverty line. 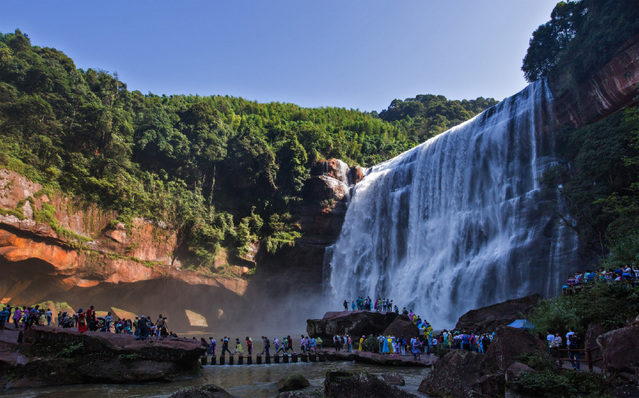 The 'Streaming down the Yangtze' team has visited one a village in Chishui where Shihu, a special herb used in Chinese medicine, has become the product-of-choice for villagers looking to raise themselves above the poverty line. [Photo: China Plus]

1. Why did the locals choose this specific herb to plant and sell?

Shihu is a very rare Chinese medicine raw material. Its growing conditions are very strict. It only grows at places with high temperature and high humidity. Additionally, those of excellent quality often grow on a unique kind of rocks. And all these conditions are right met by the natural environment of Kaixuan village. They produce a unique variety of Shihu, called Jinchai Shihu, which is very rare in the market. So when the villagers found this, they immediately went for it. Unlike planting vegetables or fruits, villagers don’t have to face fierce competitiveness from market because their Shihu is one of the kind. And also because of its high price, villagers can earn more money out of it.

2. Tell us more about the cooperative that was formed by the people. Do they earn more money using this method?

The idea of cooperative was actually come up with and organized by local government officials. Because as individuals, villagers cannot plant Shihu in scale and sell it to retailers in a consistent way. And also some villagers do own the land to grow the plant, but don’t know they have this natural advantage. So the officials talked with the villagers, especially those poor ones, to convince them to form a joint force to plant and sell Shihu. The government rent the land of local villagers and then introduced companies to undertake the whole plant business. Villagers can not only earn the rental, but also become shareholders of the Shihu business. They can participate in profit not necessarily plant Shihu themselves because the company is taking care of everything. Meantime the villagers can work for the company to earn a salary.

They do make more money this way than before. In the past they don’t know how to use their land properly but now a household can earn over 20 thousand yuan every year on average. That is considerably high in poverty areas.

3. Is there any other way villagers can make more profit?

Besides planting Shihu, local villagers also used their unique rocky landscape to build tourism spots. Our team also visited the site. And it’s very different and beautiful. The tourism brings more money as well as more jobs for the village. Many villagers of Kaixuan set up house based restaurants and earn an extra money out of it. Actually tourism is a major income for the residents throughout the whole Chishui region, since there are many natural resorts for people to tour. These tourism spots also hire local villagers and provide them a steady income.