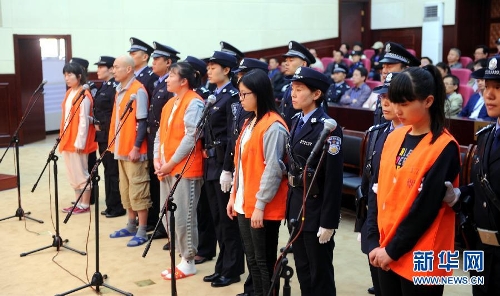 Zhang Fan and Zhang Lidong, cult members found guilty of intentional homicide in May in Zhaoyuan, Shandong Province, were sentenced to death Saturday, with another accomplice, Lyu Yingchun, given a life sentence. (Photo: Xinhua)

Leading members of a branch of the "Almighty God" cult in northeast China have stood trial in Daqing, Heilongjiang Province, since July 31, a police source said Sunday.

Heilongjiang police arrested the leader and some key members of the cult branch in northeast China in June 2017, according to a police statement.

"Almighty God," known in Chinese as Quannengshen, grabbed national headlines in May 2014 when videos went viral showing five of its members beating a woman to death at a McDonald's in Zhaoyuan, eastern Shandong Province, condemning her as an "evil spirit" as she refused to give them her mobile phone number for recruitment purposes.

According to Huang, police have processed more than 100 violent incidents initiated by the "Almighty God" members across the country and in more than 30 occasions they resisted law enforcement with violence.

According to the police source, the cult was founded by a man named Zhao Weishan, born in 1951, who had founded and participated in several cult organizations in the 1980s.

In 1993 Zhao started to claim that his mistress Yang Xiangbin was the "Almighty Goddess" and "female Jesus" and himself the "high priest."

Zhao and Yang both fled to the United States in 2000.

"He was an ordinary man, not different from others," said Zhao's ex-wife.

"He was smart but not in the right way," said his older sister.

The "Almighty God" cult borrowed some ideas from Christianity, such as the Second Coming, but altered core doctrines of the Bible, Huang Chao said.

The cult has engaged in illegal activities in the disguise of Christianity, said Lyu Dezhi, head of Heilongjiang Theological Seminary.

According to the police, the cult mostly recruits less-educated women who have family problems and at first lured them with normal Christianity teachings and then the cult ideology.

"In the beginning new recruits were not forced to donate or attend the gatherings but after becoming a convert they were manipulated to leave their family and devote everything to the cult," said a Heilongjiang police officer who investigated the case and preferred to be anonymous.

Cult members were banned from using mobile phones, watching TV and even reading normal books such as fictions. They were only allowed to read the so-called God's books and watch videos made for brainwashing.

Hundreds of ordinary people set up groups on social networks such as WeChat and QQ to look for missing family members who had joined the cult and cut off contacts.

A young woman surnamed Song from eastern Anhui Province has not seen her mother since 2014. Her mother, once an upbeat and kind person, started to believe in the "Almighty God" and apocalypse in 2012.

"When she went missing, I was about to give birth. How indifferent she became that she chose to leave home at that time?" Song said in tears.

"Followers should be devoted to the 'Almighty God,' in plain words, donating money to the organization. The more you donate, the closer you are to the God," said a former convert surnamed Zhang.

Only a small amount of the donation was used in daily operation of the organization and a majority of the money was transferred abroad, said Zhang, who used to handle money transfers.

Low-ranking followers lived a frugal life, often collecting left-over vegetables from the market. Some of the elder female members would walk or ride bikes rather than taking bus to save money.

Zhao, the cult founder, lives a luxury life in expensive villas in the United States, commanding the money flow from China.

According to a document seized by the police, about 140 million yuan (about $20.47 million) was transferred abroad from northeast China from November 2016 to March 2017.

"The cult taught me to be indifferent to my family and to be non-human," said an anonymous former convert. "All I want now is to stay with my family and make up for the pain I brought them."

To prevent the spread of the cult, it is important to raise awareness and improve education among the people, Huang Chao said.

The police also called for joint efforts of the public to root up the source of the cult.