Amazing China, a documentary film that recorded China's achievements in the past five years, will debut Friday nationwide. 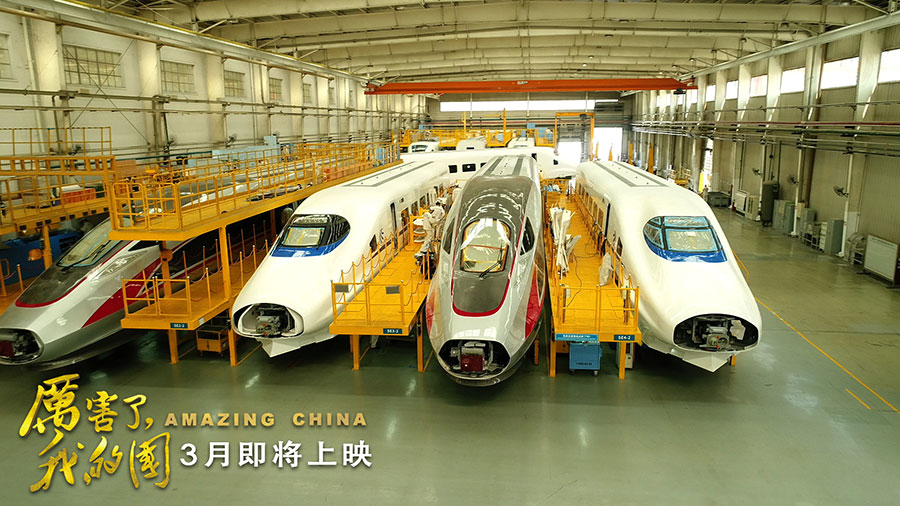 A poster for the documentary Amazing China shows bullet trains. The film will open in theaters on Friday. (Photo: China Daily)

The film was adapted from a China Central Television (CCTV) documentary series. It was co-produced by CCTV and the China Film Company.

The first half of the film contains footage of projects including the world's largest radio telescope in Southwest China's Guizhou Province, the world's largest maritime drilling rig Blue Whale 2, maglev train research and the country's development of 5G mobile technology.

The latter half tells the story of how ordinary people's lives transformed with China's development and how their personal stories reflect China's progress in poverty alleviation, ecological preservation, healthcare and national security.

The film premiered Tuesday in Beijing.

Some 38 movie stars and celebrities attended the premiere, including Wu Jing, director and lead actor of Chinese blockbuster Wolf Warriors 2. Wu suggested all guests support the film with their official Sina Weibo microblog accounts on Friday.

Attending the premiere of the documentary in which they appeared were Chen Deqi, a Fujian businessman, Lin Ming, the chief engineer of the Hong Kong-Zhuhai-Macao Bridge and Zhang Zuohe, general manager of China State Construction's Libya branch.