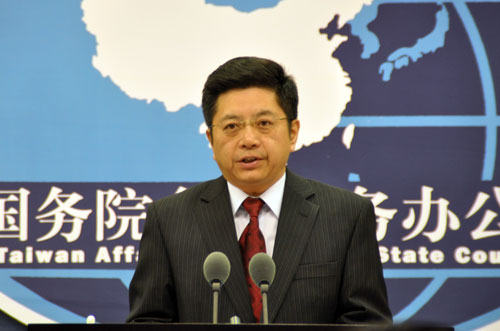 The so-called “apology statement” from a mainland TV host to Kuomintang (KMT), an opposition party in the island of Taiwan,  reported by some Taiwan media was completely inconsistent with the facts, said Ma Xiaoguang, spokesperson of the Taiwan Affairs Office of the State Council at a regular press conference on Wednesday.

Taiwan media reported that under the coordination of the Taiwan Affairs Office of the State Council, a mainland host had recently submitted an “apology statement” to the KMT, but did not apologize afterwards, which made the apology unacceptable. Ma said that there was no such situation as reported.

The KMT was planning to send the former vice president of the party, Wang Jin-pyng, to lead the delegation to the Straits Forum in Xiamen, Fujian Province on September 19.

However, it withdrew the decision on Monday, because it felt "insulted" after a mainland TV news program said the KMT is asking the mainland for peace amid the intense cross-Straits situation.

Ma said there is no need to enlarge the personal opinions of the host infinitely, which is not the proper attitude to deal with problems.