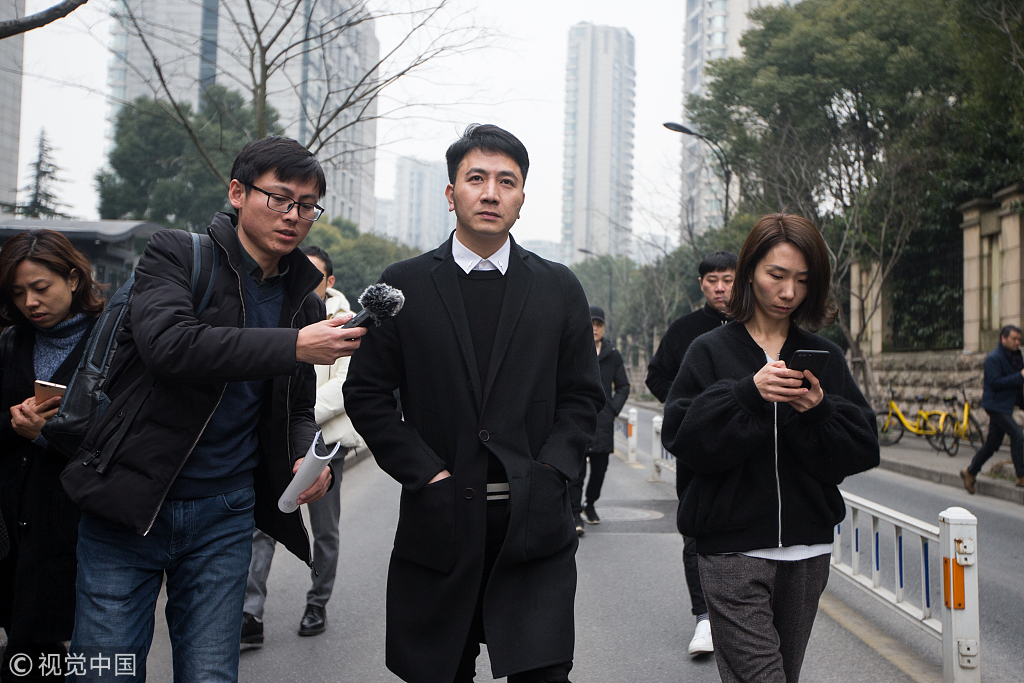 Lin Shengbin walks out of Hangzhou Intermediate People’s Court after nanny Mo Huanjing is sentenced to death on the first trial on Feb 9, 2018. (Photo/VCG)

On Monday the Hangzhou Intermediate People’s Court dismissed a civil lawsuit filed by Lin Shengbin, who lost his wife and three children in an arson attack last year, against the local fire brigade for misconduct.
Lin brought a lawsuit against nine companies or institutes including the fire brigade on May 21, asking for compensation of 130 million yuan ($20.2 million).
In a statement issued by the court on Monday, it said the court, in line with the law, on May 28 suggested Lin, together with two other plaintiffs, withdraw the civil lawsuit against the fire brigade, but was refused.
Upon investigation, the court maintained the firefighting action, conducted by the fire brigade under the Hangzhou municipal public security bureau, “should not be regarded as civil actions”, thereby didn’t belong to the scope “within which the court should handle.”
On June 25, the court again explained the situation to the plaintiffs, but they still refused to withdraw the indictment.
“Thus, a verdict was given to dismiss the civil lawsuit against the fire brigade in line with the law,” the statement read.
The court vowed to continue to hear the case in line with the law.
Lin said through his Sina Weibo account he had received the civil verdict from the court, and he felt “worn out both physically and mentally”.
“I was at a loss (for what to do next),” he said.
Nanny Mo Huanjing, who set a fire that killed Lin’s wife and children in an arson attack last year, lost an appeal against her death sentence earlier this month.