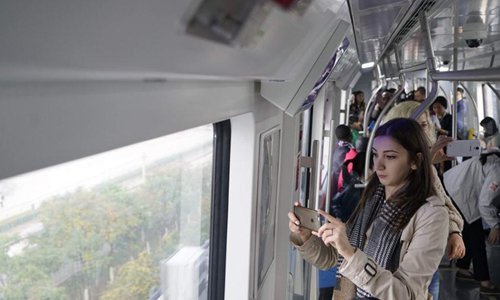 A woman who has been repeatedly exposed on social media for eating on subway trains was detained by Beijing traffic police.The woman, surnamed Wang, was detained on Tuesday for disturbing order on public transport, Beijing traffic police said in an announcement on Wednesday on its WeChat account. "Wang ate snacks on Metro Line 13 of the Beijing subway and littered the seat and floor. Passengers asked Wang to clean it up but Wang refused and left…" read the announcement.It was not the first time Wang was exposed eating on the subway. She sparked controversy after a video in 2016 was aired that she was eating smelly chicken feet in the Shanghai metro, from which she got the nickname "chicken feet lady." Wang even quarreled with passengers who tried to stop her behavior.The Beijing Subway announcement was applauded by netizens on China's Twitter-like social media Sina Weibo. "Such an uneducated woman! She deserves it!" wrote a netizen. "Well done, Beijing police!" wrote another.However, some wondered what regulations Wang violated, saying that while Wang behaved poorly, it might be too strict to detain her.The punishment depends on what Wang has done in the subway and what consequences and influence her behavior has caused. It would be dangerous if she disturbed the public order or even started a riot with passengers or subway staff, for which she could be detained, Zhi Zhenfeng, a legal expert at the Chinese Academy of Social Sciences in Beijing, told the Global Times on Wednesday.According to the Law on Penalties for Administration of Public Security, a person who disturbs the public order at stations or other public places shall be detained for not less than five days but not more than 10 days, if the circumstances are relatively serious.