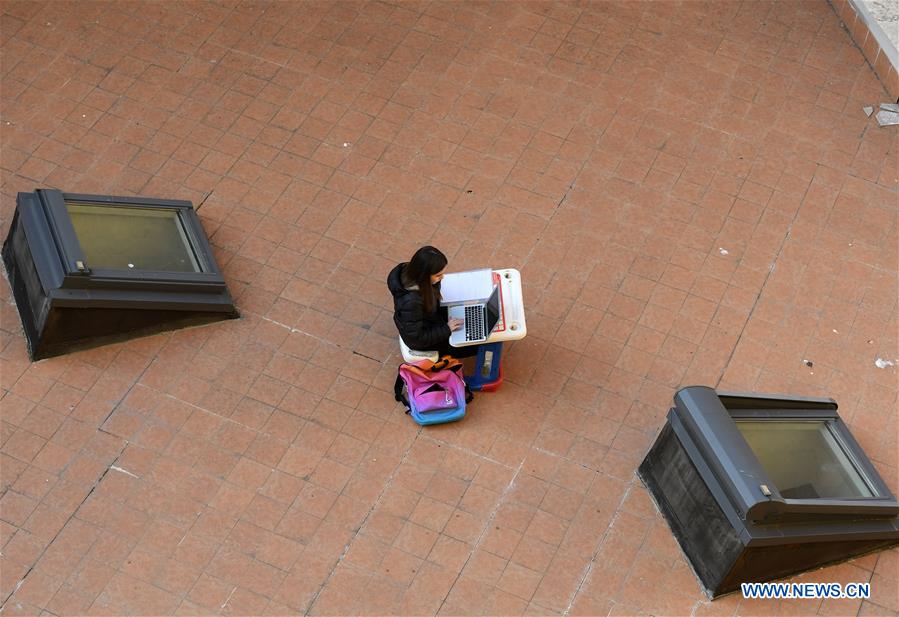 "No matter where we are, we receive timely care from our homeland. As a Chinese, I feel very proud," said Liu.

For more than a month, the number of confirmed COVID-19 cases has been steadily rising in Italy. The Chinese embassy has been doing its best to safeguard the health and security of more than 20,000 Chinese students studying in Italy and conveying the messages of care from their homeland.

According to Yu Xingguo, education counselor at the Chinese Embassy in Italy, after the coronavirus outbreak was confirmed in northern Italy, Chinese Ambassador Li Junhua immediately urged the Italian Ministry of Education, University and Research, as well as presidents of relevant universities to take care of Chinese students studying there.

The embassy wasted no time setting up a special working group and opening a hotline for students and their parents for consultation.

It also supported the establishment of a volunteer team of Chinese doctors, introduced the online health consultation platform for overseas Chinese and cooperated with Beijing Normal University in setting up a phycological support hotline, providing the students the knowledge about epidemic prevention, initial diagnosis and psychological guidance.

In addition, the embassy has been collecting information about suspected or confirmed coronavirus cases among Chinese students, communicating with them one-to-one and offering continuous help for the students, especially those residing in the heavily affected northern areas of the country. The embassy staff have been in touch with more than 50 Chinese students who needed help.

Over the past few days, the embassy has been collecting medical supplies including 20,000 facial masks, and mailed them to over 40 Chinese students' unions across Italy. The first shipment of health packs have already been distributed. The other two are under distribution as well.

Some health packs include a note with a short poem written in Chinese calligraphy. Its author is Hou Yuenan, a Chinese student in Italy. He told Xinhua that he wanted to bring comfort to his peers with his poem, and make them understand that there is no need to panic because China, their homeland, is always there for them. Surprised by the poem, several recipients posted pictures of the notes on social media.

On March 26, Ambassador Li held a video conference with representatives from all Chinese student institutions in Italy. He listened to the students' accounts of their life and study, and answered questions.

Li said that the embassy and the consulates will continue to distribute health packs to Chinese students and do their best to meet their basic protection needs. "None of the Chinese students in Italy will ever feel alone, the embassy and the consulates will always be there with you, our homeland and kin will always be with you, " said Li.