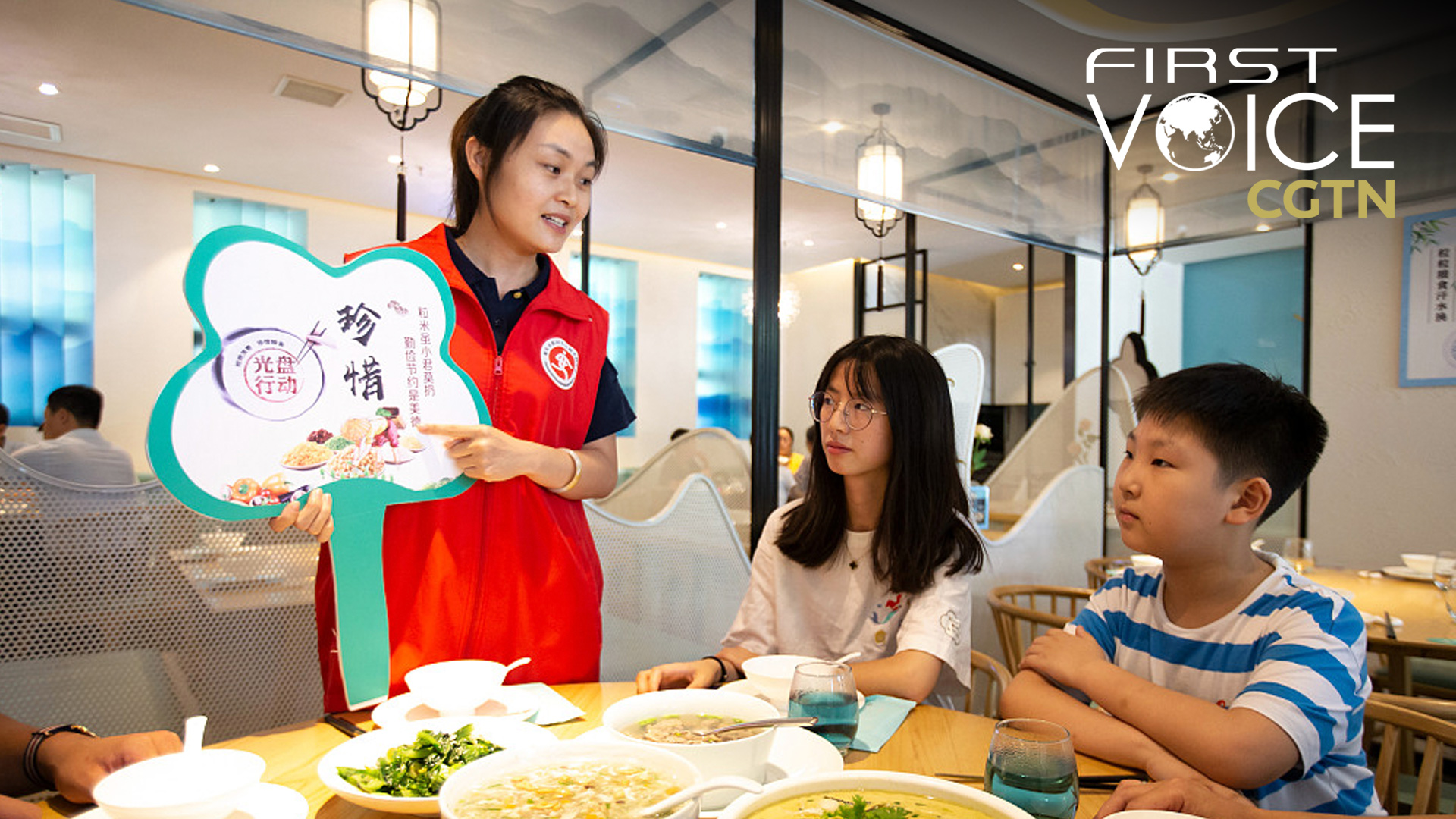 A volunteer suggests a dining family to save food at a community restaurant in Jiangsu Province, east China, August 13, 2020. (Photo: VCG)

Chinese media has been embracing with enthusiasm a "reducing-food-waste" campaign this August. The concept is nothing new. In 2013, the phrase "clean plate" was one of China's ten buzzwords of the year. The "clean plate" campaign that year, which also aimed to crack down on food waste, mainly targeted officials throwing extravagant banquets.

This time around, the wider Chinese public has been called on to participate. On August 11, Chinese president Xi Jinping urged Chinese people to reduce food waste, warning that food waste has reached an alarming level. Despite China's grain harvest in recent years, he emphasized that the country still needed to "maintain a sense of crisis" on its food security, especially at a time of the COVID-19 epidemic.

While this year's "clean plate" campaign is not directly linked to a real food crisis of any sort at the moment, the COVID-19 crisis has brought such a likelihood to Chinese authorities' attention and sparked them to take the issue of food waste more seriously.

Chen Mengshan, President of China Agricultural Technology Economics Association in an interview with People's Daily, pointed out that although China didn't face food shortages during the epidemic, it couldn't afford to overlook the disruptions the health crisis has caused to the country's agricultural production and food imports. As the pandemic poses risks to food security all around the world, many countries had to restrict food exports to secure their own domestic supply, which has led to the rise of food prices globally, Chen noted. This has made the Chinese leadership more aware of the risks associated with the country's food security. As they try to fend off such risks, the enormous domestic food waste generated has also become a cause of concern.

The issue does deserve public attention, and China needs to bring back its long-cherished tradition of "not wasting food." The idea of "thriftiness" goes far back in Chinese history. In ancient times, there was a well-known Chinese poem calling attention to farmers' hard work and encouraging people to "cherish" food. Through time, thriftiness had become a virtue in Chinese culture. When the People's Republic of China was founded in 1949, the country's economy was very much in tatters, food in dire demand and food waste would be rare. However, the rapid growth of the Chinese economy and the dramatic increase in people's personal incomes have largely removed the concern of food shortages in the past decades. Food waste has become increasingly common as a result.

China's food waste in urban areas every year is reported to be 17 million to 18 million tonnes, an amount enough to feed 30 to 40 million people for a whole year. Although the waste in Western developed countries per capita tends to be even higher, China's figure is still staggering. Given this, it is a commendable step China has taken in reducing food waste.

That said, there have been some bizzarre scenes during the campaign that have captured the public imagination. Immediately after the instructions from the government, there have been frenzied attempts to implement the call. For example, on August 14, it was reported that a restaurant in China's Changsha city put weighing scales at the entrance that allowed customers to weigh themselves so that they could order different meal packages recommended by the restaurant based on their weight. Another restaurant in the same city also decided to charge people 1 yuan for every 125 grams of food they have wasted. Practices like these have drawn huge controversy online.

Li Guoxiang, research fellow at the Rural Development Institute, Chinese Academy of Social Sciences, commented that as the campaign just started, there was some confusion about the approach to achieving the goal, and some have clearly gone too far. That said, this has prompted the public to think deeper about how much regulations should be involved in this area and in what way. Li believes, as the discussions mature, the confusion will reduce, and the public should be given the right to choose what to eat and how much to order.

Echoing the message, People's Daily had put out a message on Weibo on August 16, calling for a scientific approach to the campaign and cutting out the unreasonable policies that had surfaced so far. This is the right message, while the current thriftiness campaign is much needed, China still need to find the right way to do it in order to prevent policies from being unreasonable or too intrusive.

News about the campaign, however, has served as fodder for some Western media outlets to reinforce China's "authoritarian" image. CNN published an article this Saturday, with the title reading, "In authoritarian China, eating freely is a cherished activity. Now a food waste campaign wants to control meals, too". The article attempts to portray the efforts to encourage thriftiness in China as a utopian movement to extend the state's tentacles even deeper into individuals' daily life - dictating how they should eat.

But this is ludicrous and pathetic because whoever wrote the article doesn't comprehend why this campaign is happening or fails to acknowledge its legitimate merits. And despite some of the questionable practice we've seen so far, the article has no mention of the fact that none of those policies were enforced by the state but rather, they were introduced by individual restaurants and companies. The article, painting an apprehensive picture of China's latest thriftiness campaign, presenting one of its goals as strengthening insidious control on society, leaves out the discussions inside the country to correct some of the policies.