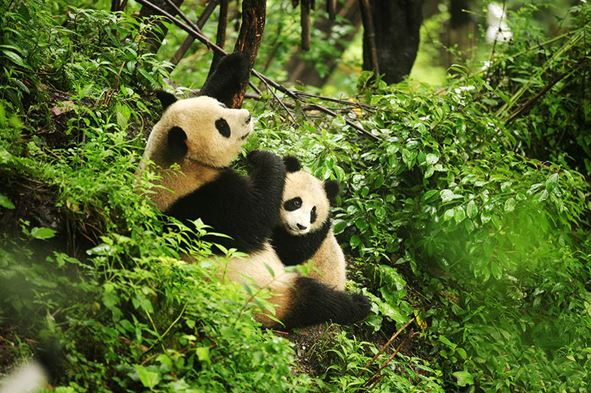 A moment of rare intimacy between wild giant pandas was captured by an infrared camera in a nature reserve in Northwest China's Gansu Province, according to the reserve administration.

The video clip was recorded in April 2018 during the pandas mating season, but was only discovered by staff at Baishuijiang National Nature Reserve when they were organizing the camera data from last year.

"Pandas are known as 'lone rangers' in the forest. It's hard to see two pandas together not fighting," said He Liwen, director of the giant panda management office under the reserve's administration. He added that they were probably in a relationship.

In 2018, 700 infrared cameras were scattered across the reserve, receiving more than 8,350 video clips and 15,800 pictures of wild animals including pandas, takins and golden monkeys.

He said the researchers had basically mastered the information related to wildlife activities and population distribution.

Giant pandas are endangered and live mainly in the mountains of Sichuan, Gansu and Shaanxi provinces.