CHINA 'Defend Taiwan' can hardly be seen as a slip of the tongue, but Biden has yet to say how or dare to 'stand against 1.4b Chinese'

'Defend Taiwan' can hardly be seen as a slip of the tongue, but Biden has yet to say how or dare to 'stand against 1.4b Chinese' 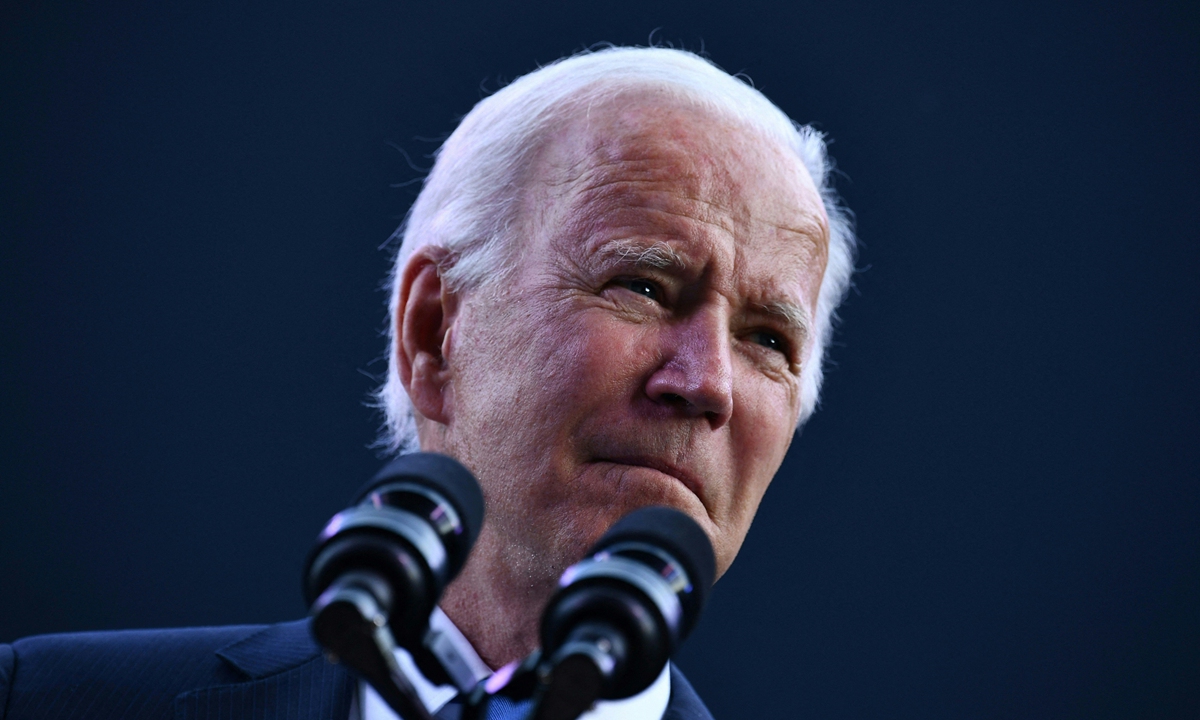 The US would come to Taiwan's defense if the island faces a Chinese mainland "incursion," US President Joe Biden confirmed on Thursday. The strongest comments from the 78-year-old leader were believed as challenging Chinese mainland's redline and also deviating from Washington's "strategic ambiguity" on the Taiwan question.

Despite the White House attempting to clarify Biden's comments to calm the situation, saying the president was "not announcing any change in our policy and there is no change in our policy," China's Foreign Ministry on Friday warned the US that China has no room for compromise when it comes to safeguarding sovereignty, security and territorial integrity.

No one should underestimate the strong resolve, determination and capability of the Chinese people to safeguard national sovereignty and territorial integrity, said Chinese Foreign Ministry spokesperson Wang Wenbin, urging the US to not "stand against the 1.4 billion Chinese people."

We urge the US side to earnestly abide by the one-China principle and the three China-US joint communiqués, be cautious in words and deeds on the Taiwan question, and refrain from sending any wrong signals to secessionist, so as not to seriously damage China-US relations and peace and stability across the Taiwan Straits, Wang said.

When asked about whether the US would protect Taiwan if China attacked in a CNN town hall meeting on Thursday night, Biden said "Yes," and the US has "a commitment to do that," US media reported.

Biden's comments came amid rising tension in the Taiwan Straits, with EU Parliament lawmakers pushing forward a resolution to deepen so-called political and economic ties with the island of Taiwan and the Biden administration's pick for ambassador to China vowing to make the island "a tough nut to crack."

Observers said the overall US policy toward the Taiwan question is becoming clearer, and that China should not interpret some of the US moves seeking cooperation with China as signs of softening.

Moreover, the argument of "domestic hawkish pressure in the US" as a reason for being tough on China is hardly impressing Chinese experts. 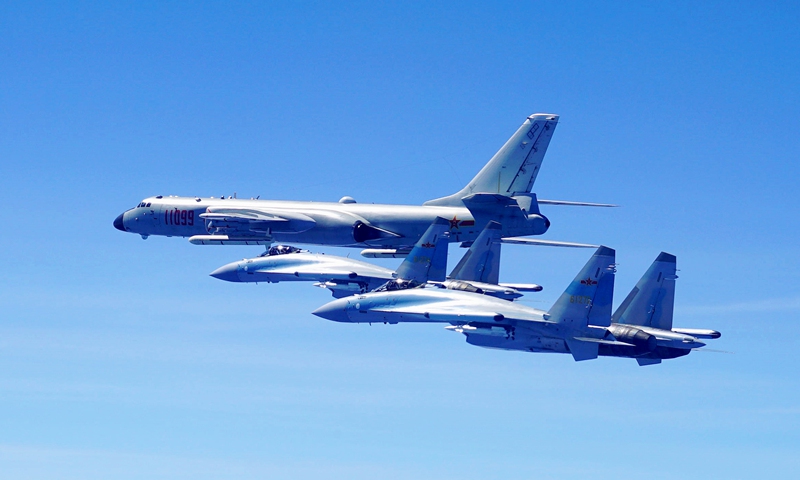 Experts reached by the Global Times believe that Biden's remarks should not be seen as a slip of the tongue or an accident. China needs to intensify its negotiations with the US in diplomacy, and in military, China should be fully prepared for tactical interventions by the US.

In August this year, when Biden attempted to appease allies after the US pullout from Afghanistan, he said, "We made a sacred commitment to Article Five that if in fact anyone were to invade or take action against our NATO allies, we would respond. Same with Japan, same with South Korea, same with - Taiwan." Observers believe that his remarks seem to confuse the island with other allies that have formal security guarantees from the US. After the interview, a high-level official also told the press that US policy toward Taiwan island has not changed.

Analysts said that many hawks see the Taiwan Relations Act as an important justification for defending Taiwan. In April 2001, then US president George W. Bush said the US would do "whatever it took to help Taiwan defend herself" in the event of an attack by the Chinese mainland, CNN reported. Bush is the only president who made such comments before Biden in the past two decades.

The US is in the process of constantly clarifying its one-China policy, including some so-called Taiwan-related legislation passed in the Trump era, Diao Daming, an associate professor at the Renmin University of China in Beijing, told the Global Times on Friday.

No matter what the White House says, Biden's remarks illustrate a US obsession with Taiwan on which his younger aides, including members of Congress, are not backing down, Diao said.

Experts said looking at the larger picture, the US' signals on the Taiwan question are still vague and complicated. Considering the need for cooperation with the Chinese mainland, some US politicians are considering whether to inherit such rhetoric popular during the Trump era.

On the CNN town hall meeting on Thursday, Biden also dismissed the idea of starting a cold war with China.

Regarding the recent remarks by the nominated US ambassador to China Nicholas Burns on the Taiwan question, calling the mainland government "aggressive" and emphasizing US commitment to the island, some experts said people should not be too optimistic about the recent detente between Chinese mainland and the US.

"In some areas the adjustment may be positive, in others, however, it may be more negative," Diao said.

"Biden is trying to convince himself of what to avoid, but at the same time he can't let go of this hyped-up obsession on certain issues," Diao said, noting if this contradiction remains for a long term, there can only be one explanation: Biden doesn't want to take responsibility if a clash happen in the Taiwan Straits happens, but he keeps ratcheting up tensions, which is extremely dangerous.

Lü Xiang, a research fellow at the Chinese Academy of Social Sciences in Beijing, told the Global Times on Friday that compared with the US government's tendencies to remove strategic ambiguity, US strategic analysis on the Taiwan question has a clearer argument, but this clarity shows US efforts to "defend" Taiwan island would be very limited, and it is more about helping the island improve its self-defense capacity and making money by doing so.

The aim is to make the Chinese mainland pay more if it ever uses force to promote reunification, including military sacrifices, as well as to ensure the mainland is politically isolated after realizing reunification, the expert said.

"So far, not a single US government official has spelt what 'defending Taiwan' means if done by the US. Does it mean sending US troops to confront the PLA? No one has ever explained in detail," said Lü, noting ambiguity still exists, and no one dares to explain it clearly.

Even if China is not yet a lion, it is at least a strong bull today. The US said it would engage China from a position of strength. China can totally say exactly the same, said Lü.

During the National Day holidays, China sent more than 150 aircrafts to Taiwan island's self-proclaimed southwest air defense identification zone. "It is a warning to the US that if Washington takes risks, Beijing's countermeasures will shock it," the expert said.

Scott Ritter, a former US Marine Corps intelligence officer, told the Global Times that to have meaningful military relations with Taiwan, the US would have to establish a major headquarters unit in Taiwan that would cost billions of dollars just to set up. In addition, the US doesn't have forces that are available to go to Taiwan. All our forces are dedicated to NATO, to the Middle East, he said.

"At the end of the day, it's gonna come down to money. How much money is the United States willing to put into the issue of Taiwan? We don't have any money available. That's the problem," Ritter said.

Some say Biden is under pressure from domestic conservatives in the US, and experts reached by Global Times do not totally disagree with this perspective.

Biden has a strong sense of value and ideology within the Democratic Party, and his involvement in legislation related to arms sales to Taiwan was also evident during his time in the Senate.

If we compare the pressure Biden is facing domestically over the Taiwan question and the withdrawal decision from Afghanistan, it is hard to say which is larger. But in Afghanistan, Biden did what he wanted, Diao said.

"Domestic pressure" can be used as a bargaining chip for countries to gain leverage at the negotiating table, Diao said, suspecting that Biden's "defending-Taiwan" rhetoric may be driven more by his own will than by opposition pressure.

The role of the so-called opposition may be to show Beijing that there is a lot of pressure at home, so he has to say it strongly and Beijing has to accept this, Diao said.

Biden has not yet shown dominant strength in handling US domestic affairs. But he is tough on external affairs. He assumes that he has rich experience in this regard. If he has clear targets, he will not be constrained by so-called pressure, Diao said.