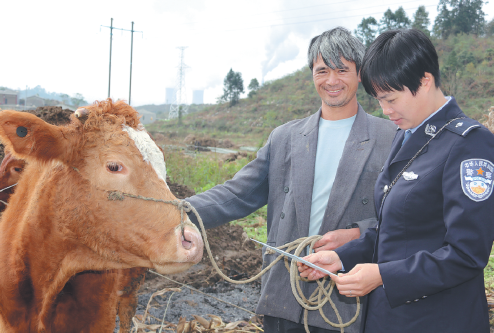 A farmer shows his ox with a microchip "earring" to a police officer in Pu'an county, Qianxinan Bouyei and Miao autonomous prefecture in Guizhou province. (Photo: China Daily)

Farmer Wang Mingfu noticed his ox was missing when he woke on a chilly October morning in his village in Pu'an county, Guizhou province.

Wang and the animal live close together in the farm compound, and checking its enclosure is part of his morning routine. Worth 10,000 yuan ($1,422), the animal is a prized farm asset.

However, Wang had taken precautions against the ox's theft by having a microchip embedded in its ears, which allows the "earring" to be tracked via satellite. He called the police who, with the help of a mobile tracking device, located the animal in woodland about 5 kilometers from Wang's home.

In Pu'an county, at least 17 cases of cattle theft since January have triggered panic among farmers. Police achieved some success in stopping the thefts, recovering 32 stolen animals since August.

The government of Qianxinan Bouyei and Miao autonomous prefecture, where Pu'an is located, recently stepped up efforts to stop the cattle rustling by issuing "peace cards" to impoverished households and farmers who live close to livestock. The cards provide a hotline number to police who promise to deal quickly with cattle thefts. It also explains to farmers how to apply for subsidies if their case is not solved within 30 days.

Wang Zhixian, an officer at Qingshan police station in Pu'an, said inserting the chips into the cattle population was time-consuming, but worth the effort.

"The process is slow because farmers are dispersed across a wide area. Police officers have to organize a group of villagers to gather the cattle and help them insert the earrings in all of them," he said.

Wang Zhixian said farmers get the card and the chip, which is worth 80 yuan, for free.

"It was the public security bureau of the prefecture that sponsored the project initially. The county government also gave financial support to help solve the problem," he said.

"I used to lock my cattle in the compound and get up five or six times at night to check if they had been stolen," he said.

Chen said that after getting the card, he and his wife had stopped living so close to the oxen.

"We are no longer worried about losing the cattle. Now we keep them outside the compound. Thieves are also aware of the police's firm action against theft, which scares them away," Chen said.

Chen Zhongyue, a 52-year-old farmer in the same village, spent a lot of time taking care of his two oxen and a horse. After getting the card, he installed a camera to monitor his livestock, which freed him up for other farmwork.

"We have benefited a lot from the card. I am no longer in fear of losing our livestock, and I've borrowed 50,000 yuan to buy three more oxen," he said.

Liu Wenxin, Party secretary of the prefecture, said he asked the government to implement the card program in five pilot townships and villages in late August after gathering information on livestock theft from police stations.

In September, the program was promoted across the county.

By the end of October, the county government, which spent 20 million yuan on the program, had handed out 5,712 cards and helped embed chips in 1,109 oxen.

A total of 407 tracking stations were also built, covering 94 percent of the county.