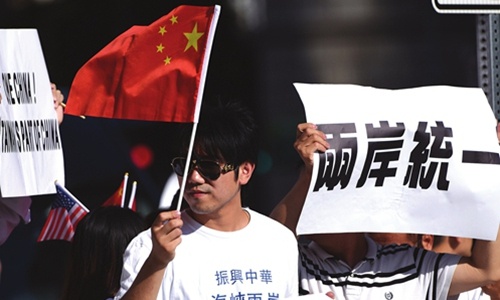 A Chinese community in Los Angeles calls for reunification and protests Taiwan leader Tsai Ing-wen making a stopover in the US in August 2018. (Photo: cnsphoto)

The importance of China's Anti-Secession Law must be understood profoundly and Taiwan secessionists' moves must be firmly opposed to push forward the peaceful reunification of the island, a senior Chinese official said at a forum on the 15th anniversary of the enactment of the Anti-Secession Law, held at the Great Hall of the People in Beijing on Friday.

The remarks were made by Li Zhanshu, a member of the Standing Committee of the Political Bureau of the Communist Party of China Central Committee and chairman of the National People's Congress Standing Committee. Li said that the law was based on China's Constitution, and is in line with the central government's plan regarding Taiwan. The law provides a legal basis for stable cross-Straits relations, the Xinhua News Agency reported

The law was enacted in 2005, when Taiwan island was ruled by the separatist Democratic Progressive Party and the then Taiwan leader Chen Shui-bian was actively pushing "Taiwan independence."

Li pointed out that Taiwan secessionists have long misjudged the situation and keep provoking and damaging the core interests of people on both sides of the Straits. Secessionists continue to sabotage cross-Straits stability by challenging China's bottom line of safeguarding the country's sovereignty and territorial integrity. There must be a crackdown on such behavior, warned Li, adding that no matter what tricks Taiwan secessionists play and what show they stage with foreign forces, it won't change the fact that Taiwan is part of China.

Li said people across the Straits should join hands to oppose Taiwan secessionism and push forward unification. The well-being of Taiwan compatriots remains at heart of the Communist Party of China and the central government, which have strived to create conditions to propel communication across the Straits. Taiwan people should pond Taiwan's position in national rejuvenation; and recognize the evil intention of Taiwan secessionists, said Li, who reiterated that reunification of Taiwan is China's internal affairs, and no interference from foreign forces can be tolerated.