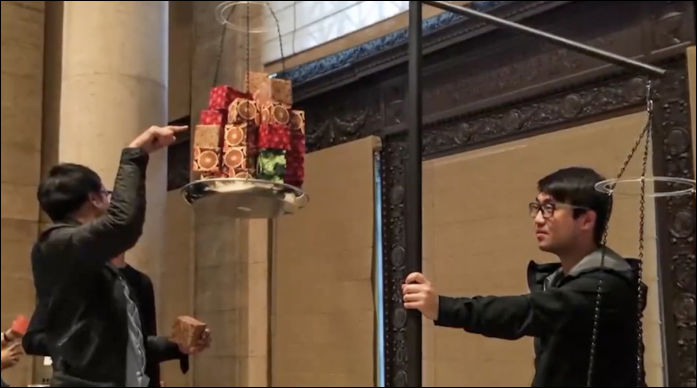 How to combat climate change is a heavily debated topic. Some believe individuals can play a big role by actually monitoring what they eat.

One woman from China living in San Francisco is making people think about our environmental impact through something called "food design."

It uses a grain called kernza, which puts down deeper roots, meaning less tilling of the soil and less carbon released into the atmosphere.

"The problem with environmentalism, up to this point is that people see it as 'un-fun,' said Karen Leibowitz, co-owner of The Perennial restaurant. “In many ways, talking about food and climate can sound like being on a diet. What we’re saying is, 'This is pleasurable, there’s beauty, there’s flavor.'”

One way The Perennial is making food environmentalism more palatable is by partnering with China-born food designer Yunwen Tu.

Tutu, as she’s known, shows me her "In the Balance" project, which demonstrates how you need lots of foods – oranges, tomatoes, broccoli, salmon, eggs and an extra salmon – to surpass the amount of carbon dioxide emitted from cheese.

“How a lot of businesses produce food now is actually based on the customer’s and consumer’s needs,” said Tu. “So if we help people learn about how to choose a better food, more sustainable way to eat food, we’ll make a different decision for those businesses.”

Tutu is even able to make use of The Perennial’s old menus.

By combining the pulp with food waste, Tutu makes paper that can not only carry plantable seeds, but also be used to make postcards or business cards.

Tutu has taken her ideas to the streets of San Francisco, with her work having been displayed at food symposiums and museums.

She’s also written the book "Protein Fantasy," which showcases her designs for the future of food at a time when people will more easily be able to create it themselves.

She even has a prototype for a strawberry that would squeeze out in a paste.

And for meat, Tutu came up with a curly shape that would allow the consumer to grip and savor it.

“This idea is inspired by Xiao Longbao, the little soup dumpling in China,” said Tu. “The idea is the shape itself and how the Xiao Longbao wrap the pork inside it. So I was thinking if I can change the form, can I design a shape that people will eat it slower and with more different interaction, like smell it, lick it, instead of just put a bulk of meat in your mouth?”

As future food production transforms and speeds up,Tutu says it’s important to not only to think about convenience, but also how people will interact with food for both health and happiness.