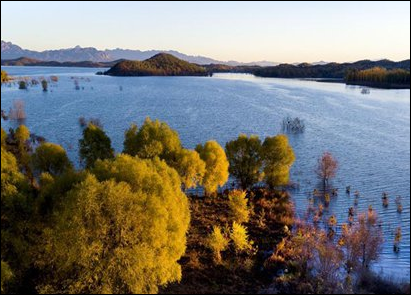 Photo taken on Oct. 30, 2018 shows the autumn scenery at Miyun reservoir, the capital city's major reserve of drinking water, in Beijing, capital of China. The scenic reservoir nestled in the mountains of northeastern Beijing covers 188 square kilometers and has a storage capacity of 4.3 billion cubic meters. (Photo: Xinhua)

Some 78.9 percent of China's surface water was deemed "good quality" by the environment authorities  as of November, an increase of 2.6 percentage points on last year and a result which Chinese analysts cited as evidence of an improving overall environment across the country.

China has a water quality ranking system: from best I to worst V. Levels I-III accounted for 78.9 of all surface water, according to data from the Ministry of Ecology and Environment.

Level I-III means water is directly drinkable or drinkable after processing, according to national standards; while level V water is unusable and unsuitable for human contact.

Ma Jun, director of the Beijing-based Institute of Public and Environmental Affairs, told the Global Times that the increasing percentage of drinkable water showed that efforts  at addressing water pollution have yielded results in China.

In 2015, China launched a 10-pronged campaign against water pollution including regulations, legal and administrative responsibilities.

And curbing the pollution of underground water costs more and takes longer than surface, Ma said.